Zacuto has posted the first of three episodes of their "Great Camera Shootout 2011."

Last year they did a similar thing, producing a series of tests comparing DSLRs with film. This year they changed things up a bit; first they had Robert Primes, ASC independently organize and run the tests, and secondly they included other large chip cameras like the Sony F35, RED OME MX, ARRI Alexa, Panasonic AG-AF100 and Sony PMW-F3, as well as come DSLRs from last years tests. Once again, they included film for comparison.

The tests were made, and then shown to DPs in a series of screenings in Sydney, Amsterdam, New York, London NAB and Hollywood. Zactuo filmed both the production of the tests, as well as the audience reaction at the showings, and has put together this documentary about the project.

The first episode measures Dynamic Range and Latitude using an ARRI dynamic range test chart, as well as a pair of scenes that were shot to test under- and over- exposure.

On the Dynamic Range test chart, the ARRI Alexa did best of the digital cameras with 14.1 stops, while the Red One MX had 11.9 and Sony F35 11.3, the PMW-F3 11.2 (same as Canon 5D Mark II and 1D Mark IV). But as you'll see in the under and exposure tests, there's a lot more to it than simply the range; what does the image actually look like?

One note: in the two tests, the same settings were used for both shots; so the camera wasn't adjusted to "do it's best." They acknowledge this at the beginning of the test, saying that they “wanted to show how the cameras perform in a stress situation.”

Perhaps as expected from the numbers, the ARRI and RED performed very well in the underexposure tests, though the other cameras weren't that far behind. In the over exposure tests, the F35, Alexa and RED grouped together, performing very well and rivaling film, while most of the other cameras; the PMW-F3, AG-AF100 and the DSLRs really blew out the highlights. Worse, some of them gave those highlights a yellow cast. 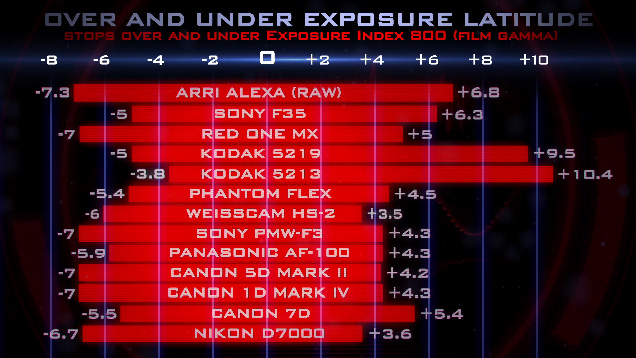 The difference in the way the cameras perform - particularly in the over-exposure test - is explained by the chart above, which shows the distribution of the exposure latitude.

Another interesting detail from the chart above is that the 7D performed a bit better than the 5D in some situations because of the difference in the way the exposure is distributed.

One thing that seemed clear from these first tests; the Red and Alexa really give film a run for it's money.

This test is just one element, in future episodes they will be covering: noise, motion artifacts, resolution, compression and color. The next two episodes are expected in July and August.