This is Part 2 of the series. Part 1 covered the basic requirements, camera and monitoring choices. NotesOnVideo: Kitting out a Sony NEX-FS100: Part 1

The objective is to kit out an NEX-FS100 with a total budget of no more than $19,000 - including camera - for shooting an indie feature.

Rules of the Game


Feel free to make your own suggestions; there's no "right" answer. However, there is a basic budget, so don't go suggesting the Zeiss Custom 7-Lens Compact Prime CP.2 Set, which at $26,700 is about $9,000 more than the total budget! If you suggest a different lens, also indicate which one(s) you would do away with!

Alpha Mounts
The lensing choices get interesting, because his requirements were:
and he'd originally chosen a set of mostly Sigma lenses with Alpha mounts. If it was me, I'm not sure I'd jump on the Alpha mount, and I told him so!


Having already acquired several Canon lenses, and found that they aren't the ideal thing to put on a non-Canon camera, if I did start buying lenses with another mount I'm not too sure I'd jump on the Sony Alpha mount. I'm not saying I wouldn't, but I'd at least consider going with the Nikon mount instead, as it almost seems the most neutral mount around (I can find adapters for Nikon to Canon, E-Mount and Micro Four thirds easily...)

The Sony Alpha mount does let the camera control aperture, which if you want that, then that's a reason to go with the Alpha lenses. Also, they may support focus, though I've heard very mixed things about that and it's probably something you don't want to use.

I also noted that a couple of the lenses are APS-C lenses; fine for the NEX-FS100, but maybe not for the Canon 5D Mark III (if they ever make one!) and concluded with:


I've come to the conclusion that lenses will -probably - outlast the cameras, so buy the best you can....as long as you know what mount to get!

Nikon Mount - maybe
He promptly changed to Nikon mounts...
...then back to Alpha because of the lack of stops on the lenses

I then pointed out that the MTF Services Ltd Nikon G to Sony E Mount Adaptor [$375.95] lets you control aperture, though I didn't know how fiddly it is to operate. Certainly there's an advantage to having the camera talk to the lens and tell you in the viewfinder what's going on...

But now he's back to Nikon again...but is that the right choice? What would you get? 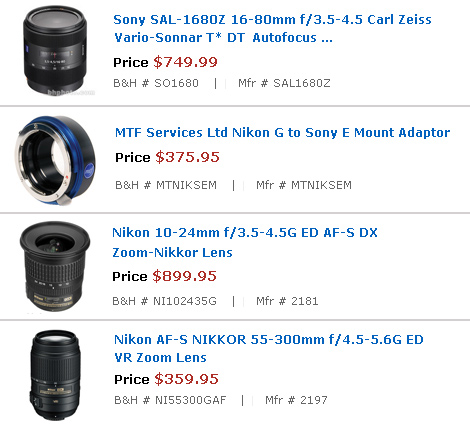 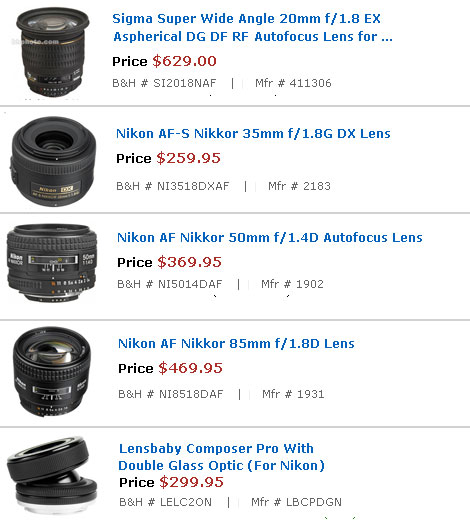 The next installment covers other accessories (rigs, tripods etc.)

Lens choices. Prime set seems reasonable, but the zooms all ramp aperture. You're going to find that SO much more annoying then you think you're going to. My suggestion, get a tokina 11-16 for wide, sigma 24-70 for normal and I don't have a good tele choice off the top of my head, but I'd HEAVILY bias towards constant aperture lenses for video.