Again, the objective was to to kit out an NEX-FS100 with a total budget of no more than $19,000 - including camera - for shooting an indie feature.

Rules of the Game


Feel free to make your own suggestions; there's no "right" answer. However, there is a budget, so if you suggest something additional - or more expensive - than the current choice, also indicate what you would do away with!

When it came to accessories, I didn't really have much input, so here's the list for a Shoulder rig, focus puller and matte box.

Rigs are sort of personal, and probably your body shape plays a big part too! I've tried some rigs and hated them - so I would never buy one without trying it out first.

I might be tempted to get a cheaper focus unit, but Zacuto builds strong stuff and stands behind it. For those reasons, if you can afford it, they are the thing to buy. 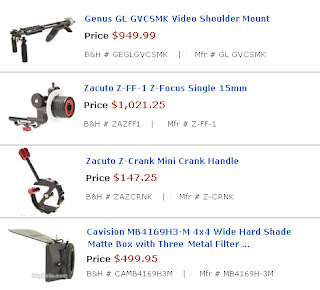 Audio
An Audio-Technica Shotgun and a Sony wireless have been chosen here. I have the Sony wireless unit and like it, so no disagreement there! I have no experience with the Audio-Technica, though I have a Sennheiser ME66/K6 which is similar. Personally, I don't like using shotguns any more; unless I have someone to point it at the subject! 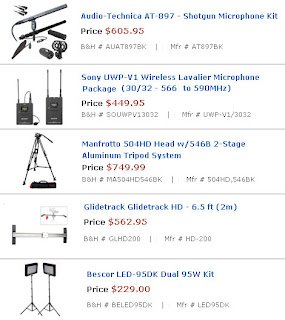 Despite the user reviews noting the flimsy construction, this LED light kit for $229 looks really interesting. I have also seen Chinese light kits selling for very little on eBay.

Other
He's also chosen some bags and other items, which I'll list here. Again, I have no experience with these items, so no real opinion; I seem to have amassed a mishmash of different bags from Kata and other makers. They aren't bad, but if I was starting from scratch I'd probably buy a more rational collection!