Is your wireless mic illegal?

I’ve been following the DTV transition with mild disinterest. I thought I sort-of knew what was going on, but one thing I had completely missed is that the shuffle around of spectrum impacts the users of wireless mics.

Previous generations (i.e. the one I bought two years ago) use part of the television spectrum (698-806 MHz: referred to as the 700 MHz band) to transmit. But with the DTV transition, things have gotten moved about, and parts of that spectrum will soon be allocated to emergency services and other parts were sold off to AT&T and friends. 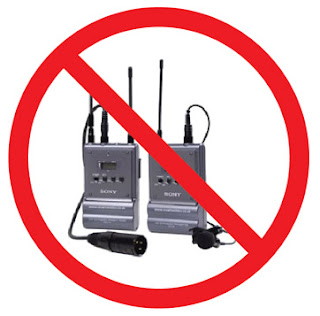 So, in theory, those wireless mic systems are illegal after February 2009. Now, it’s not clear what that really means in the short term. Manufacturers have brought out new systems. Your existing systems will continue to work; though it’s possible you’ll start experiencing more interference.

A friend who works at a broadcast station says they just went through all their gear, identifying equipment that they wouldn’t be able to use after the switch. Television stations have a slightly different relationship to the FCC though; they have licenses from the FCC to use certain spectrum, and have to be careful they don’t break any rules!

I was talking about this with another friend, and we agreed that individuals using the gear were unlikely to run afoul of authorities; most systems don’t transmit very powerful signals, so we’re more likely to be impacted by other users (like Verizon or EMT) than vice versa.

For me, I have to remember to pack the hard-wired lavaliere in the future incase of interference issues, and I guess start saving for a replacement.

SOURCES
Get Ready for FCC changes: Undated. A short piece outlining the issues

Sennheiser Press Release Re: Wireless Mic Frequency Concerns: October 28, 2008. This is almost an FAQ on the issues. Good background

Sennheiser : FCC Rules for NEW TV BAND DEVICES: What This Means For Wireless Microphone Users, November 18, 2008. Much more information about the issues and what Sennheiser says about it.

Shure: What Digital TV Means to Wireless Microphone Users Undated. A rather terse explanation from Shure.

The cameras are slowly arriving in peoples hands, and more reports and sample images and clips are appearing.


Phil Holland has put up a review of the Canon 5D Mark II. He’s generally happy about it, noting that the image quality compares very favorably with his 1Ds Mark III. He finds the low light capabilities impressive and he's included some sample images and video. He notes the problems with adjusting and setting exposure settings in video mode, and suggests getting Nikon AI-s lenses and a lens adapter so that you can at least manually set the aperture!

Or, perhaps Canon will let you set things in a future upgrade. Or maybe we should just wait for the next camera?

There’s whispers of a “Black spot” issue that seems to occur in some cases when shooting bright highlights. Reportedly Canon is looking into it.

DVInfo has created a dedicated forum for the 5D Mk II, suggesting that this camera is really popular with video freaks (and I mean that in a nice way.) And Charles Wu has suggested a trick for selecting ISO, shutter and aperture manually.

1. Setting to M mode. Use your hand to cover the lens, controlling the amount of light coming in. You will see the ISO going up and the aperture and shutter going down.