Blu-ray has already won the format war. Not only is there fully functional and mature support for Blu-ray in other operating systems but you can now rent Blu-ray discs from almost any rental chain. Blu-ray has become pervasive technology that is being widely adopted by consumers everywhere

No word on software support though.

Just a few days ago, the Redrock DSLR Rig was mentioned - a rig for holding/operating a DSLR like a film camera. The price isn't even out for that, and here comes the Zacuto Mini Baseplate which offers many of the same features, though it adds a video screen and promises of better balance when holding the camera.
Posted by Michael Murie at 1:53 PM 0 comments 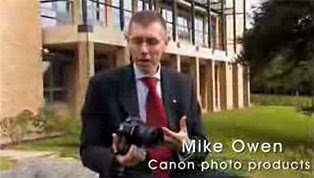 JVC has ceased production of standalone VHS players. They still produce combo units, but this marks the end of stand alone VHS production in Japan. This, I guess, could mean that there's still standalone units being made in China.

6.41 million VCRs were shipped in Japan in 2000, the number had withered to 280,000 units by 2007, according to the Japan Electronics and Information Technology Industries Association

Less than a month ago - right after the announcement of the Nikon D90 and Canon 5D Mark II - RED, the maker of the low-cost (comparatively) high-resolution Red One digital video camera announced that they were reworking their plans for a much lower cost digital video camera called Scarlet. They'd originally previewed the Scarlet, as well as hinted at plans for a DSLR as well.

And now comes Jim Jannard — Red's CEO — announcing on RedUser forums that their new announcement on November 13th will blow everyone's sox off.

[...] This makes the RED ONE announcement seem small by comparison.

November is National Novel Writing Month
Posted by Michael Murie at 10:39 AM 0 comments

Camcorderinfo.com has reviewed the Nikon D90, with particular emphasis on the video capabilities. Unfortunately, the results aren't very pretty. While I expected the notes about "jelly video" I wasn't expecting the issues with over-heating that they reported.

Manual controls are peculiar or unusable, auto focus is non-existent, and its 1280 x 720 maximum picture quality just doesn't cut it when compared to a dedicated HD camcorder. Recording videos for extended intervals also caused the D90 to run into overheating issues—prompting a swift shutdown of video mode.

They did like the 24p mode for it's cinematic look, and they found that the low-light performance was reasonably good - though they had been expecting better - but in general they weren't impressed by it as a video camera.

The 24 fps shutter speed does create a unique look, and it has a more cinematic feel than the 24P mode some camcorders offer. However, the D90 has way too many problems with video performance—choppy auto exposure, no auto focus, rolling shutter (producing wobble), artifacting, moiré patterns, and lack of sharpness with images of fine detail.

Also troubling was the five minute clip limit (note that the Canon 5D Mark II limit is about 12 minutes.) They also found that after about 30 minutes of continuous use the sensor would overheat and the camera would shut off live-view mode. They then had to wait about 15 minutes before using it again.
Posted by Michael Murie at 8:31 AM 0 comments