Over on Gizmodo, Frank Beacham tells a charming story about Orson Welles, the early days of Sony Betacam, and dreams that might have been.

Whenever I see a tiny new camcorder introduced, or see Apple upgrade a revolutionary application like iMovie, I think of Orson. Oh, how excited he'd be. The pure magic of it all! If he were alive today, he'd be making his movies without regard to raising huge amounts of money. That, for both Orson and his audience, would be an achievement that we'll never be able to enjoy.

...and connects nicely with the story of Fede Alvarez, who made a $300 video and landed himself a $30 million contract with Ghost House Pictures. 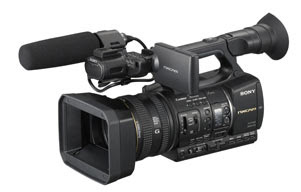 Tonklemoose [really?! -Ed] the Twitter account for UK video equipment retailer creativevideo.co.uk reports that the Sony NXCAM model will be called the HXR-NX5, and that it will be available in January (probably after CES?)
Posted by Michael Murie at 9:33 AM 2 comments

Camcorderinfo.com takes a bash at reviewing the Canon 7D’s video performance. They don’t do a full review, but then you can find that at Digitalcamerainfo.com; the two sites have actually created a combined review with Camorderinfo doing the video aspects, and Digitalcamerainfo.com doing the still camera functionality.

The Camcorderinfo page sums up most aspects of video performance. They found that color accuracy was no better than the competition, they were “fairly impressed” by the motion performance, and it did better than the others in low light, but for sharpness it was found to be weaker than the Panasonic GH1 and Canon 5D Mark II. Make sure you go to the linked pages at Digitalcamerainfo.com that go into more details, as they  also compare the performance relative to some video camcorders as well.


While the Canon 7D's sharpness numbers aren't that bad, they definitely are lower than some consumer HD camcorders are capable—specifically in bright light. The Canon HF S100, HF20, and JVC GZ-HM400 all did better than the 7D in our video sharpness testing.


I wish that in the charts where they compare performance they had included one or two video cameras, rather than just the GH1, 5D Mark II and Nikon D5000. While it's interesting to know how the DSLR cameras compare to each other, it would also be helpful to see how they compare to true video cameras.

One other thing I should note is that they used the 28-135 f3.5-5.56 kit lens for their sharpness tests; at least in the still comparison, so I’m assuming they did so for the video part too. I’m guessing it’s taken as read that with video, the performance of the lens isn’t going to drastically alter the results for video sharpness.

Overheating continues to be an issue for some users of the Canon 7D, with lots of theories about what is causing it, or how to avoid it. There are some things we know for certain, and many things that are the subject of wild speculation. Here’s what’s known: 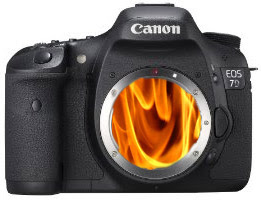 There's ongoing discussion of this problem in this thread at dvinfo.net.

Meanwhile Ole Jørgen Liodden, at Canon Field Reviews, reports that he took a 7D to Antarctica, and found it performed very well. He probably didn’t have any problems with overheating… 7D #1 Weather Sealing

Also - for what it's worth - he had no problems with a 5D Mark II he had with him, which is a bit of a surprise. Earlier this year there was a report of a photography expedition (which maybe wasn’t quite as hard core as Liodden’s seemed to be, but it was still pretty extreme) and the users of the 5D’s suffered a fair number of failures.

The largest group of failures through were among the Canon 5D MKIIs. Of the 26 samples of this camera onboard, one quarter (six) failed at one time or another, and while three recovered, the other three never did.
- Luminous Landscape: Antarctica 2009

[UPDATE 12/17] One thing that might not be clear to those that have not been closely following this issue: all the reports of over-heating relate to long periods of continuous video shooting, and usually don't appear until the second hour of usage. If you're shooting stills, or shooting short video sequences (say one or two four-five minute sequences) then you should have no problems with over-heating
Posted by Michael Murie at 2:40 PM 0 comments