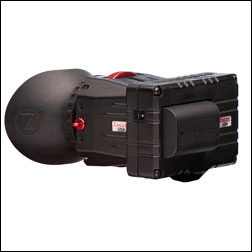 While they had already announced it on the web, Zacuto now has an official press release out on their upcoming EVF Electronic Viewfinder. There's nothing really new here, except that I'm trying to figure out if the sentence that begins "An upgrade path for existing Z-Finder users..."means that the Z-Finder EVF will use a slightly different Z-Finder optical unit, or does that just mean that they are going to offer existing users some kind of discount?!:


Pricing and Availability: Z-Finder EVF has a list price of $775.00. An upgrade path for existing Z-Finder users and a combo-kit (Z-Finder with EVF) will be available at a discounted price (TBD)

PRWeb: Zacuto USA Announces the Introduction of the Z-Finder EVF Electronic Viewfinder for DSLR Cameras
Posted by Michael Murie at 9:00 AM 0 comments

Marshall Monitors is running one of those annoying Twitter campaigns; follow their Twitter account (@marshallusa) and Tweet a message (I'm going to win a new #Marshall V-LCD50-HDMI 5-inch LCD on-camera / DSLR monitor from @marshallusa http://bit.ly/ag2LcH) by November 15th to win. Maximum of one tweet per day per person.
One good thing; the competition is open to anyone in the world...

Marshall 5″ V-LCD50-HDMI and Small HD DP6
Jared Abrams at Cinema5D takes a quick look at these two monitors that are designed for HDSLR shooters. The Small HD is a little more expensive, has a few more options you might like, but also uses slightly different peaking and focus assist color highlighting.

By they way, here's the optional V-H50 hood for the Marshall 5" HDMI monitor. It's shown on Marshall's site, but not yet available from other sellers (at least I can't find it on B&H).

Panasonic AG-AF100 Information
Panasonic has announced that the AG-AF100 will be officially available December 27th for $4,995, and confirmed other details:

Weighing only 3.5 pounds (without lens or battery), the AF100 includes Dynamic Range Stretch in all modes and frame rates; six built-in, customizable scene files that are exchangeable for quick and easy matching between multiple cameras; seven built-in gamma curves with four selectable color matrices; Syncro-scan shutter; and a high-resolution LCD and viewfinder.

It also offers a focus assist that can be used while recording, which is color-on peaking and a focus bar; two sets of adjustable zebras; two manual black and white balance choices, and preset White Balance at 3200K, 5600K or variable; a waveform monitor and vectorscope for more accurate monitoring of broadcast safe levels. Other essential features include pre-record; an intervalometer function that can be set for up to 24 hours, programmable User Buttons; a Smart Battery interface for recording up to four hours with a 5400mA battery; metadata recording; and a wireless infrared remote controller.

New book on DSLR video
Kurt Lancaster has a book coming out in November on shooting film/video with HDSLRs: DSLR Cinema: Crafting the Film Look with Video

When did Editors become prima donnas?
Walter Biscard wonders why editors aren't happy with what they have, and why they keep complaining...
While I generally agree with him, complaining does serve to keep driving things forward, and I think it's unwise to think that some people who post on internet forums reflect the entire community.
Biscardi Creative Blog: When did Editors become prima donnas?

Posted by Michael Murie at 9:30 AM 0 comments

Massachusetts event is this Monday, October 18th:
Join us in Boston at the National Professional Videographers of New England’s meeting on October 18. The NPVA members are engaged in the full spectrum of videography and post-production work, from wedding and event videography to broadcast, documentary and corporate video production.

Sony NEX-VG10 in the flesh

I finally got to handle an NEX-VG10 yesterday. They had one at the Sony store at the Mall; they said it had only come in that morning.

The first thing that surprised me was how stiff the zoom lens is. I was expecting it to be a bit stiff; maybe like the Canon zoom lens I have on my HDDSLR, but it's much worse than that. Really unusable to zoom while shooting. Sure, using the zoom in narrative work is discouraged, but in documentary and other forms you often use a zoom now and again.

The next thing to surprise me was how uncomfortable it is to hold by the handle; I seemed to want to put my hand where the back support of the handle was located; which didn't work. Because of this, it just felt awkward to hold.

I couldn't judge the camera image much by waving it around in the store, but I wasn't as excited as I thought I would be.

Canon DSLR Output Signals
Thinking of getting a monitor to use with your HDSLR? Then there's something you need to know; they don't output a full HD signal out the HDMI port when you're recording. SmallHD.com (who sells monitors) has an article/video explaining what's going on with the different cameras.
SmallHD: The TRUTH about Canon DSLR Output Signals

Personally, I have a Beachtek mixer/adaptor that I used to use with a video camera to connect XLR mics to the camera. It was really great, but with that particular camera I could still monitor what the camera was recording, because the video camera had a microphone jack. Unfortunately, not all HDSLR cameras let you monitor audio being recorded, and while the mixer provides an audio monitor jack, it's only showing what it's sending to the camera, not what is actually being recorded. I think I'd rather spend the money on a separate audio recorder.
Filmmakeriq: Beachtek DXA-5DA: Pro Audio for HD-DSLR cameras – an IQ Exclusive Review

Blip.tv payments more than just a Blip?
According to the Blip.tv blog, they sent out checks to blip.tv producers; one of which received $143,000...but they don't say what the average payment is!
Blip.tv: Blip.tv Q3 payouts are out!

Making Media Now 2010: The Changing Media Landscape: How do we keep up?

Making Media Now 2010 is a one day conference in Boston, November 6, 2010. Topics include: Social Media, Typography & Film, Managing your Production in a Digital World, and Distribution Models. 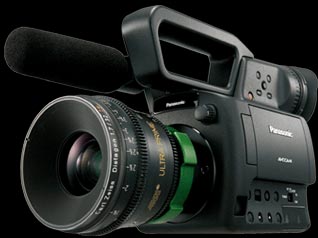 ProLost; Do You Want to be a Grown Up?
Posted by Michael Murie at 8:00 AM 0 comments

Is HDSLR Dead?
Does the arrival of large sensor video cameras like the Panasonic AG-AF100 mean the end of the HDSLR's days? Frank Glencairn, and a few others seem to think so:


Okay, this is it. VDSLR is dead. It was cool, it was fun, it was great but it was also a major pain in the ass. It´s over. Panasonic came out with the AF100 at IBC and then there is Sony and the Scarlet soon.

I think is may be a bit too soon to start the funeral procession. For those on a budget cameras like the Canon T2i will remain attractive. For TV and film, I get the feeling that many have been using the HDSLR's more for their small size than because they think they are saving money.

I think the AG-AF100 will go after the RED market, and probably the wedding market.
Frank Glencairn: VDSLR - R.I.P.
HDWarrior: Frank Glencairn talks about the demise of the VDSLR

4K at Sony
4k? Didn't we just all go HD? Is 4K next? Canon was showing a 4K camera (demo only) back at their recent New York Expo, and now Film Journal has an article about Sony's work in 4K.
Film Journal: 4K goes mainstream: Behind the scenes at Sony headquarters in Japan

Compressing for Vimeo
If you're like me, you've probably come up with your own list of settings for preparing a video for YouTube or Vimeo, but here's Vimeo's official list of suggested settings:
Vimeo: Compression Guidelines

Jason Bourne and Matt Demon won't be in fourth Bourne movie
Then it's not a Bourne movie, is it?
FilmSchoolRejects: Fourth Bourne Film Will Not Feature Jason Bourne, Matt Damon, Or A Reason To Be
Posted by Michael Murie at 9:00 AM 0 comments

Tiffen Smoothee
The last news on the Steadicam Smoothee, a steadicam for the Flip and iPhone, was in June when they said it would be available Fourth Quarter for under $200.

Sam Grobart at the Gadgetwise blog now reports that it will be "available in December and sell for $180." He says it's a little bulky to be carried around by the casual user, but the result is scarily, Kubrickily smooth. 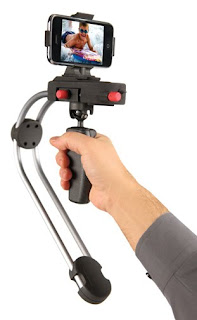 No site - including Amazon - is yet listing the device. Amazon does carry the Manfrotto 585 ModoSteady 3-in-1 Camera/Camcorder Stabilizer and Support System which is only $89.90, but it seems to get pretty average to poor reviews.
Gadgetwise: A Steadicam for Your iPhone 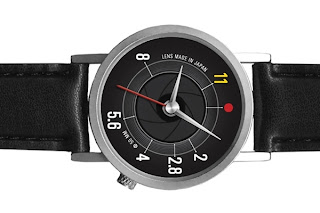 Panasonic 3D Consumer HDC-SDT750
Philip Johnson at HDWarrior continues to love the Panasonic HDC-SDT750 consumer 3D video camera. In his latest update he talks about using it for shooting at a wedding; primarily talking about setup, controls, appearance, and whether clients would be concerned about a camera that small. It would be really nice to actually see some footage shot with this camera... 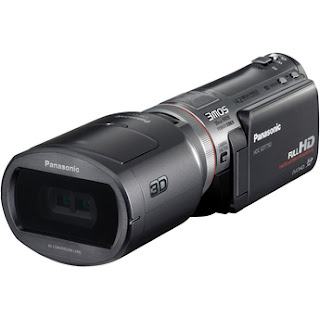 Today is: One Day On Earth

On October 10, 2010 (10.10.10), across the planet, documentary filmmakers, students, and inspired citizens will record the human experience over a 24-hour period and contribute their voice to the largest participatory media event in history.

Founded in 2008, ONE DAY ON EARTH is creating an online community, shared archive, and film. Together, we will showcase the amazing diversity, conflict, tragedy, and triumph that occur in one day. We invite you to join our international community of thousands of filmmakers, hundreds of schools, and dozens of non-profits, and contribute to this unique global mosaic. Through the One Day on Earth platform, we will establish a community that not only watches, but participates.

One Day On Earth

One Day on Earth Participant Trailer from One Day On Earth on Vimeo.

Posted by Michael Murie at 1:00 AM 0 comments