Just about as soon as it was released, people started complaining about the limitations of the video capabilities in the 5D Mk II. There’s two notable problems:

The latter is a big problem for those in Europe, and those wanting to use this camera for content to be distributed on film, while the former is a problem for almost everyone.

Now there’s some unconvincing rumors that there will be a firmware update in April that will “add a feature.” What is that feature? Who knows? But if they did add manual controls of some kind, I might be tempted to buy one of these beasts (at the moment I’m content to save my money figuring that the next camera will add those manual controls, and will be the better buy.)
Posted by Michael Murie at 2:51 PM 0 comments 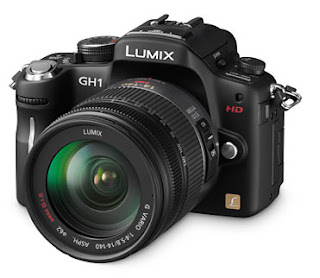 First there was the Nikon D90 and the Canon 5D Mark II, and now here comes the Panasonic Lumix DMC-GH1, the third DSLR to arrive with HD video. You can read the announcement here.

The GH1 is a Micro Four Thirds system camera; it has interchangeable lenses, but because it’s designed around a smaller sensor the body and lens are smaller than the SLRs from Canon and Nikon. On the video side of things, the camera supports: full HD (1920 x 1080) video at 24 fps or 720P HD video (1280 x 720) movie at 60 fps using the AVCHD format (MPEG-4/H.264). You can see some sample videos on Panasonic’s site (though not at full resolution.)

More importantly, auto-focus will work while recording movies, and you can manually set aperture and shutter, a feature lacking on the 5D Mk II that’s driving some users mad.

Unlike the D90 and 5D Mk II, this camera also has a swivel LCD screen on the back, which could be really useful when using it as a video camera. On the other hand, the camera has a video viewfinder rather than an optical one. I would find that a little disturbing if I was buying it as a still camera. I prefer optical viewfinders.

Shipping date and price hasn’t yet been released, though it’ll probably be under $1,500.

It’s still too early to tell how well the camera will stand up in the review process. How good is the video? Does the camera suffer from Rolling Shutter problems? We’ll have to wait and see...but the future definitely seems to be HD video on DSLR cameras.