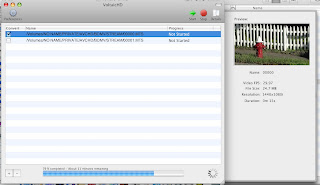 To provide a little more illumination on how the SDHC conversion works in Final Cut Express;

When you either mount the camera in disk mode (or have the SDHC card inserted in a card reader) and open the Log and Transfer window, the name of the volume appears with a spinning progress indicator: 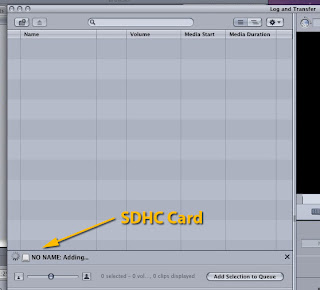 After about 20 seconds, a list of clips appears. You can preview them, set in and out points, or simply drag from the top window to the bottom. The bottom window is a queue of clips to be converted. 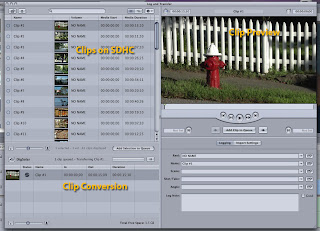 Note that FCE only seems to recognize AVCHD files if they are contained within a valid file structure. If you try and copy the .MTS file into Log and Transfer from another location, you get an error message:

I had two concerns when considering getting an AVCHD camera:

1. Dealing with archiving all that video content that I could no longer just file away on the tapes on which it was recorded.

I’m still working on 1, but issue 2 seems to work okay…though there are issues.


I’ve been using Final Cut Pro for a couple of years, and Apple announced support for the AVCHD compressor with the latest release of it and FC Express. That meant upgrading, and – long story short – I ended up buying Final Cut Express 4.0, because it was cheaper than buying the Final Cut Pro suite.

After shooting some video with the Panasonic AG-HMC70U – and installing the software – I tried inserting the SDHC card into the card reader, mounting that, and accessing the files. The card mounted fine, and revealed a somewhat confusing directory structure, but I eventually found what I took to be the data files (.MTS) in a folder called STREAM. Unfortunately, these files were completely unrecognized by the system, and by the QuickTime player.

Putting the card back in the camera, connecting it using USB, and putting it in “disk mode” produced exactly the same results.

This revealed that Final Cut Express can’t edit AVCHD files directly. Instead, you have to use the Log and Capture tool to view the clips and then convert them over into a format that Final Cut likes.

Opening the Log and Transfer tool, a small spinning icon appeared with the name of the SDHC card, and after about 20 seconds, it displayed a list of clips with icons. You can then select a clip, preview it, and choose in and out edit points. But you have to convert the clips before you can add them to the timeline. This is where things get more worrying, for while the preview is almost instantaneous and works well, the transfer process takes a lot of time. Admittedly I was running this on the lowest of the low – a 1.83GHz MiniMac - but it took 9 and a half minutes to transfer a 5 minute clip. That’s less than real time!

I found a review of Final Cute Express 4 that cites slightly better performance using a MacBook Pro with a 2.33 processor. Transfer times are 1:1.32 – better, but still less than one to one, which is how long it takes to transfer from an HD tape-based camera. (Note: the review suggests that FCE will only convert files that are on the camera, but I think the important part is the file structure; I mounted the card using the card reader and was able to transfer successfully.)

More troubling, the conversion process converts the files to the Apple Intermediate Codec (AIC) and the files are much, much larger than the AVCHD files (the 5 minute clip was 460.6 MB with AVCHD and went to 4.26GB in AIC.)

I have mixed feelings about these results.

a) This is the first rev of Final Cut Express to support the AVCHD compressor. I’m sure that in a year or so, the software will improve, the computers will get faster, and we’ll be editing AVCHD content without going through a conversion step. Also, I’m not shooting video every day, so I’m willing to take some of the pain right now.

b) However, if I was shooting day in and out right now, I’d skip this camera and get the Sony HVR-HD1000. The files are ultimately smaller, and more importantly, the transfer process is faster with HD minitapes if you’re doing more than a minute or two of video. There’s definitely some payback with the random access nature of the cards, if you’re shooting lots of little random bits, and only want to transfer over short subsets, then the loss of time during transfer offest by other gains. It really depends on what you are doing.

c) I’m going to archive the AVCHD clips, not the converted ones. I'm concerned that this may cause problems if I later want to import them into FCE (how to get it to recognize the files seems to be an issue.) The utility VoltaicHD may be particularly helpful for this, and I’m going to look into it. It claims to convert AVCHD files to AIC format. They also claim that their converted files are only four times the size of the AVCHD files.

d) What I’m going to do with the AIC files I’ve converted for projects, I’m not sure; probably save them in the short term, and delete them when I’m sure I won’t need to go back and reedit a sequence.


Finally, it’s important to note that Apple’s support for AVCHD requires the latest OS, and an Intel processor. It’s not available otherwise. The VoltaicHD utility supposedly runs on other machines – I’m going to try it – though they note that it requires quite a bit of system memory for converting longer clips.
Posted by Michael Murie at 2:27 PM 3 comments

The AG-HMC70U comes with a 2GB SDHC card. That should hold about 20 minutes of video at the highest quality setting. Not too bad for playing about with, but not enough for everyday use.

B and H Photo (where I bought the AG-HMC70U), lists – amongst accessories - a Panasonic 16GB Class 6 card for $129.95. Considering what I’ve paid over the years for Compact Flash cards, that’s almost like giving them away, but I thought I could do better.

A search for SDHC cards at Amazon came up with only a few 16 GB cards (though I think the number increases each time I go back there!) My first preference was for a name brand card. The SanDisk Ultra II seemed like the obvious choice, which they were selling for $89.99. SanDisk is a “known” entity; they have been around for a while, and I have several cards from them already that I have been happy with. But a little research revealed that this card is a Class 4, with a maximum transfer rate of 15 MB/sec. The AG-HMC70U maximum bit rate is 13, so in theory a Class 4 should be fine, but there are Class 6 cards out there. I thought it would be better – both for this camera, and for any future purchases - to get a Class 6 if it wasn’t too much more.

My search proceeded to the SanDisk Extreme III, which was too much at $74.89 for 8GB, and ultimately to the Transcend 16GB (SD 2.0 SPD Class 6) which at $51.85, was cheaper than the Class 4 card, and included a simple card reader too! While I don’t really know anything about Transcend, the price difference was enough to make me give it a try.

I ordered the card, and can report that - so far - the card (and reader) have worked just fine. The card reader is about the size of a USB memory stick, and I wonder how long it will last; I once got a card reader bundled with a memory stick and it lasted two weeks before it stopped working.