The BOSFCPUG Mixer last night featured a demo of Autodesk Smoke, an update on features in Avid Media Composer, and a recap of AJA I/O products.

But I’m burying the lead.

Did you know that University of Massachusetts has a Club? And that it’s on the 33rd floor of a building in the Boston business district? Me neither! A pretty impressive sort of place; and not one of our usual haunts: last nights affair had an air of unexpected sophistication, what with the 33 floor high view, the fancy buffet, and the barman. This is your father’s video club. 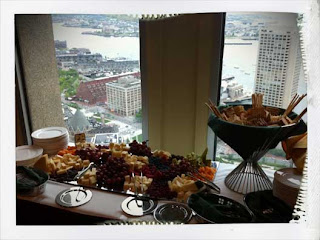 Daniel Bérubé kicked off the event by drawing our attention to the view. He also mentioned next week’s London SuperMeet, and said that they were still trying to organize streaming for the event. And, though it wasn’t unexpected, he confirmed that SuperMeet will be coming back to Boston in October.


Ken Larue on Smoke
Ken Larue demoed Autodesk Smoke, and opened with an impressive show real and the following observation; “I’m not here to tell you to use one application or another…[but] working in multiple applications is a pain; with Smoke you can do it all in one."

On a personal note; he’s right. I’ve been working on a project in Final Cut Pro which consists of about 25 Motion projects. Switching back and forth between the two programs can really become a pain. Of course, it’s not helped by the fact that I don’t have the 16GB of memory I really need, either.

Ken demoed Auto Paint, a painting tool that can be used repetitively on multiple frames. He used it to touch up part of a frame, and then repeated the correction over an entire sequence. He removed a logo from a surface by first cleaning it up in one frame, and then mapping that correction to the region over a sequence of frames. 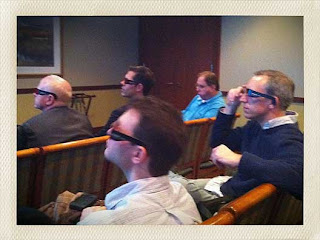 Get your 3D Glasses on!
He demoed some very cool 3D compositing, with matting and a 3D lens flare. He also imported 3D files into the scene. To finish, he demoed editing 3D (stereo) video sequences, adding a 3D text object to the sequence and creating a virtual stereo camera.

I've said this before, but I'll say it again, Smoke has an unusual interface, but it is a powerful application. I think I’d have to be using it 24/7 to master it. You can download a 30 day trial, and students and teachers can get a 36 month free trial.

A related, but separate feature called PhraseFind searches – phonetically – through footage. Whether you’re shooting a scripted movie or a documentary, one of those feature will be useful to you. 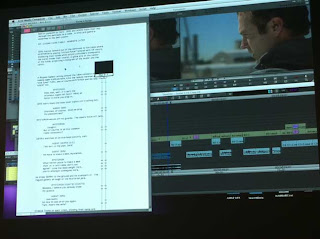 ScriptSync
My favorite quote of the evening came from Bob when, while demoing the RTAS Tool plug-ins for audio, he said:


“There’s this entire incredible, crazy subculture. If you talk to any audio guy, there’s this whole gear envy type of thing [over what] you want to have rack mounted in your studio. So this is really new for us in the video world, but now we have all these different boxes that you can essentially emulate.”

Daniel Bérubé noted that Avid is now in Burlington, and that the BOSFCPUG might hold a meeting there sometime in the future. Also, if you’re a Final Cut Pro user, you have until the 17th to take Avid up on a $995 upgrade to Avid Media Composer.
Avid: Got Final Cut? Get Media Composer for Just $995 USD


AJA
Jay Ignaszewski wrapped up the evening with a quick run through of AJA gear, highlighting the Key Pro Mini (for those whimps that felt the 6 lb Ki Pro was too heavy.) They also raffled off a Key Pro Mini to one lucky attendee.


Upcoming
The London SuperMeet happens next week, and the next BOSFCPUG meeting is scheduled to feature Steve Martin talking about FCP X and also doing his standup rotuine.