A few first impressions of the AG-HMC70U:

It’s pretty big. I was expecting that, but it’s somehow bigger than I expected or imagined. I guess I’ve been spending so much time with “small cameras” I forgot how big, shoulder cameras tend to be. The size isn’t an issue when on your shoulder, but it does make it more awkward to schlep around, and though I have a large bag I carry the HDR-FX1 around in, it’s too large for that.

Having said that, I was pleasantly surprised at how solid the body felt. Frankly, I was thinking that it might feel like a big empty plastic box, given that there’s no tape mechanism, the electronics are probably pretty small, and I imagine there’s a lot of empty space in that shell. Weight wise it’s probably a little heavier than the FX1, but not by much.

Speaking of the body, it’s surprisingly devoid of buttons and switches (the FX1 is covered in them.) The BNC and XLR jacks certainly take up a lot of space on the back, but take those away and there are not many other controls. I knew – from other articles – that there was no focus ring; still I couldn’t help reaching to the lens thinking there’d be some kind of control there. There isn’t; there’s what looks like a focus or zoom ring, but it doesn’t do anything other than keep the lens shade on.

There is manual focus; but you use the multi-purpose cursor buttons on the side of the camera to move focus in and out. I don’t think I’ll be doing that very often.

The battery took two or three hours to fully charge. Even though it’s very small, it gives almost an hour and a half of charge, so I’m happy about that. I was worried it would only be a half hour or so. I didn’t read the manual, so it took me several seconds to figure out how to attach the battery! Maybe it’s because I’m so used to Sony equipment, but I fiddled with that thing for quite some time before I figured out how to get it to sit right.

In addition to the camera, I had ordered a 16GB card. With the empty card and a full battery the viewfinder tells me I have about 180 minutes of video (188 I think) and about 108 minutes of battery life. That’s probably going to be more than enough for most of the things I do. I had thought about getting an 8GB card as well, so I’d have something to switch to should I fill the primary card, but I’m not sure that’s really going to be necessary. I’m also going to hold off on getting a second battery for the moment.

Once I got the battery in, and turned it on for the first time, it asked me to set the date and time. I hit the wrong button half way through that process, but it was easy to use the menu button and navigate through the menus to find the date and time setup function again. I’ve had devices that have been a lot more confusing to set up date and time, so points for that. Did I mention that I generally avoid reading manuals? The camera menus are fairly straight forward, even if you do have to go through a few steps to get to different functions.

Perhaps my biggest surprise was how difficult I found it to hold the camera steady when not on my shoulder. I’m starting to think that the image stabilization is not that great. This is not a deal breaker, but it is a disappointment, and I really need to do some tests with the FX1 to compare.

Note: I keep comparing it to the FX1 not because I think it’s a direct competitor to that camera, but because it’s the closest comparable camera I have.

Getting the eyecup onto the viewfinder took a little fiddling; and I put it on the wrong way around the first time. Then I discovered that the viewfinder was terribly out of focus. I couldn’t find anything obvious for adjusting the focus, and the instruction manuals index listed nothing helpful (viewfinder adjustment, dioptic, etc) but I did eventually find it after paging through the manual; there is a rotating slider-like adjustment on the top of the viewfinder, just behind the viewfinder screen (you have to pull the front of the viewfinder out to see it.)

The viewfinder seems to always be on; whether the side LCD panel is open (and on) or not.

There’s two rocker switches for controlling the zoom. The one on the top of the handle by the viewfinder is a single-speed zoom, but there are three speeds that you select between by sliding a small switch on the side of the handle. 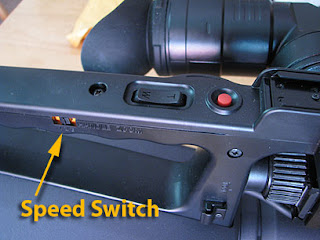 The rocker switch on the front of the camera is a really nice vari-zoom one. It feels very good, and functions smoothly, and is actually higher in quality than I was expecting. 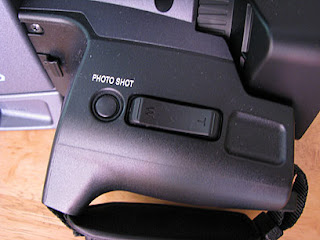 Funniest of all; displayed onscreen in the bottom half of the viewfinder screen are two horizontal rows of little squares that light up. They are positioned at the sides, and it took me way to long to realize – because there was basically no noise when I was first playing with it – that they were the sound levels, and not some light or focus indicator!

Finally, the lens cover is a piece of flat plastic with ridges around the edges that you push onto the front of the lens shade. I’m sure it will be lost in a couple of weeks. There’s a plastic hoop that you can tie a chord to so that you don’t lose it, but it’s so large I’m not sure I want it hanging about while using the camera. By comparison, the FX1 has two plastic flaps built in to the lens shade that flip away when you move a lever.
Posted by Michael Murie at 4:27 PM 0 comments

I'm not a big fan of those unboxing videos and articles that people keep doing, but since I got the thing and I had a camera near by...

Open the box (left), and you find inside another box (right) that looks almost exactly the same; only slightly smaller 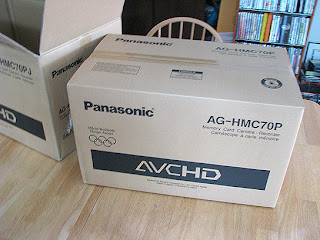 Open the top, and you see the software discs, memory card (2 GB) and the side of the camera. The right-hand side compartment holds the power supply. Lift that tray out, and you see the lens cover and remote (right) and protective packaging: 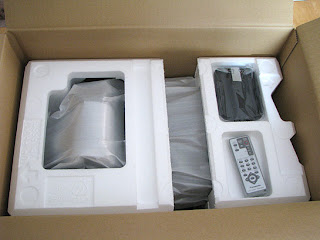 Take out the next layer, and there's the camera, sitting in a protective baggy: 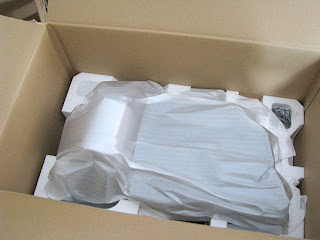 And here she is, right out of the baggy, with a piece of protective wrapping around the viewfinder arm (the rubber eyecup for the viewfinder isn't attached); 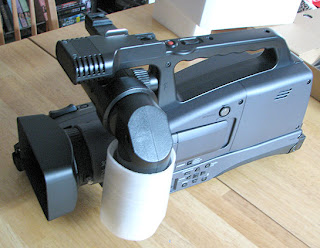 Here's the camera, with all the parts in front, clockwise from left: 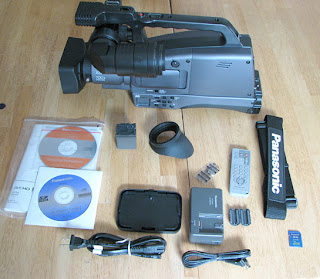 I have had a Sony HDR-FX1 for about three years now, and wanted to get another HD camcorder so that I could do multi-camera shoots. I had been looking at the Sony HVR-HD1000U; a long name for a fairly straight-forward camera. The HD1000U is a one chip HD camera in a shoulder-mount form factor. Its big selling point is that it sells for $1,599. That’s basically half what the FX1 cost.

Also appealing – for me - was the shoulder-mount form factor. While I like the FX1, it’s one weakness is that it’s not usable on the shoulder; so most of the time I hold it in front of me. That’s fine for a lot of things, but sometimes a shoulder-mount camera can be really useful.

An additional plus point is that being from Sony – I felt – would mean that color reproduction was probably pretty similar to the FX1, and I thought it would make for a good pairing.

Then I heard about the Panasonic AG-HMC70U.

Like the HD1000U, it’s in a shoulder mount form factor, but it also has XLR audio inputs, which - if you’re using anything other than the on-board mics - is really useful. Like the FX1, it’s a three-chip camera; though they are 1/4 inch chips instead of the 1/3 inch chips on the FX1.

But there’s one other BIG difference between the AG-HMC70U and both the FX1 and the HD1000U; while the two Sony’s record to HD tapes, the AG-HMC70U records to SDHD chips using the AVCHD compressor. 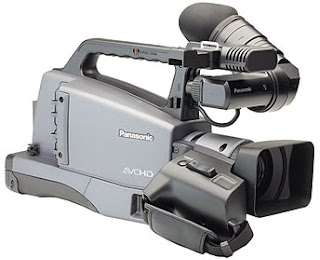 Let’s face it; the world’s going tapeless, and despite my concerns about backing up and archiving all that video data, there’s some big advantages to recording to either memory or a disk drive rather than to a tape. The most significant it that being able to randomly find and access clips immediately, and choose and then immediately transfer them, really is a benefit when you’re the one stuck doing the logging and transferring.

I know the AG-HMC70U isn’t perfect; it’s innards are virtually equivalent to the consumer cameras Panasonic makes. It has very few manual controls, and because it’s from another manufacturer I suspect that color matching with the FX1 will be difficult…but it’s shoulder-mount form factor, XLR audio inputs and tapeless recording made it impossible for me to resist.

So I’ve ordered one…
Posted by Michael Murie at 5:02 PM 1 comments