A friend is putting together a camera kit to shoot a low budget thriller. The project will be shot over the course of several months, a few days each month. It will be very weather dependent, so he thinks that owning a camera package is the way to go.

He's put together a pretty extensive list of gear, and he asked me to look over the list and give him a second opinion. I did, but I'm not sure I'm the best qualified to do this, so to all the readers out there; what's your opinion of this gear list?

I'm posting the details of the list, along with some of my comments, and the back and forth we have already had. Because this piece turned out a bit longer than I expected, I'm going to post it in three parts: Part 1: Camera/Recording/Monitoring, Part 2: Lenses and Part 3: Accessories. The next two parts will be posted tomorrow. 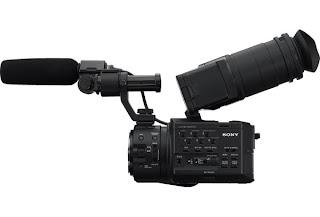 Camera
As the title confirms, he chose the Sony NEX-FS100 as a camera. There are really only two other alternatives; the Panasonic AG-AF100 or the Sony PMW-F3. The NEX-FS100 does better in low light than the AG-AF100, and the PMW-F3 would overwhelm his budget. I'd go with the NEX-FS100 too, so I didn't even question it.


Viewfinder
I've heard from others that you really need an EVF with the NEX-FS100, even though it has that big LCD and large loupe. The reality is that if you're using it on a shoulder rig, the built-in viewfinder is in the wrong position. I've heard great things about the Zacuto EVF, so no question about that either. 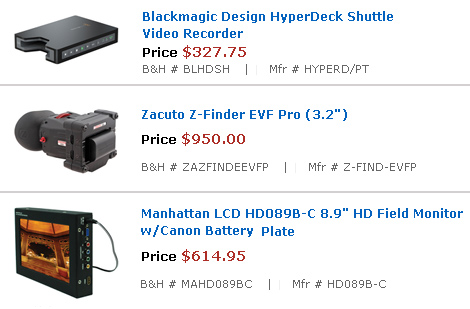 I have no experience with the Shuttle or the Ninja, though the Shuttle is more recent [is it actually shipping?]. I'd almost go with the Ninja because it can replay what you record without attaching it to a display; though it looks like he won't be short on monitoring options.

I had originally queried the 5" monitor, writing:


What's the purpose of the Marshall 5"? Is it for a focus puller or for the Director to view content? Will it be mounted on the camera or external? I liked the Marshall monitor BEFORE the Zactuo EVF appeared; I thought it would make a great EVF because it's also not that large. If it's for focus pulling and mounted on the camera rig, then it's probably the right choice. If it's for others to review content, you might want to get something larger?

His response at first was:


the Marshall was for three reasons;
1) the director is a former camera assist, and is happiest watching on a camera monitor
2) the Marshall gives me false color exposure,
3) Marshall shows peaking for an assistant still on the learning curve. When I have an assistant it will likely be either a battle hardened friend out for a lark, or a person just escaped from film school looking for credits. For most of this I will be pulling focus myself though; did I mention low budget?

That sounded reasonable to me, but now it seems he's switched to the Manhatten, and when I asked why he said:


Bigger monitor to amuse the director, and the rig seems more multi-purpose

Fortunately the director used to be a union cam assistant, and pulled focus for me on a movie-of-the-week a few years ago... in the rain all night shooting a motorcycle chase, waiting for the stunt guys to come close to their marks

The more amused he is, the easier my life is.. he leaves camera completely alone, even lets me block scenes within reason

Continued in Part 2: Lenses
Posted by Michael Murie at 9:00 PM

any stabilization? what about a kesler pocket jib with a cine slider on top? for the lens I think the easier bid is a set of Zeiss (also a lot easier to sell when the producion ends)

While the Shuttle looks awesome and has a nice price point, where the heck are you going to store all that uncompressed data?! The Ninja gives you ProRes that could well look as good as uncompressed but save you in required hard drive space!

Really? I know that neither the Ninja or Blackmagic products can record a proper 24p HDMI signal from a FS100 because of the proprietary Sony encoding on the HDMI stream. I tried it YESTERDAY.

I know that you are all about recommending B&H products, but really? Why would you recommend products that don't work together at 24P!

Had I purchased 20 cameras and 20 recorders for my film school program based on your recommendation I would be fired. This blog has lost all credibility to me.

There are plenty of places to find trustworthy information on line, and clearly this is not one of them.

@Cinemajestic: You did read the second paragraph, didn't you:

"He's put together a pretty extensive list of gear, and he asked me to look over the list and give him a second opinion. I did, but I'm not sure I'm the best qualified to do this, so to all the readers out there; what's your opinion of this gear list?"

So what would you recommend instead? The Nano?

I'm under the impression that none of the HDMI recorders will do 24p directly with the NEX-FS100 and you have to use 24p-over-60i then do 2:3 pulldown removal in post.