Christopher Breen has a review of the Flip MinoHD (120 minutes) and seems to be generally happy with it:

...the Flip MinoHD [is now] my new favorite pocket camcorder.

Like other cameras, the results of its low-light shooting can be grainy. However, it compensates for the wild color shifts you get from some of these cameras. Under typical lamp light, for example, most pick up a yellow cast and a few over-compensate and bring too much blue to the picture. The new MinoHD gets much closer to the true color—white objects are white instead of yellow.

All good stuff, but is anyone else getting confused by Flip's product line, and what does what? A look at their products page reveals the following models:

I've only included a few specifications here, and ignoring the first two - because they do only standard video - I guess what puzzles me is the UltraHD/MinoHD 60/Mino HD 120. They all support 720p, but the physical size, recording length, screen and video out connections seem to be the key differences. When you boil it down, it seems to be that the MinoHD 60 has the shorter recording time and no HDMI. While the UltraHD and MinoHD 120min match on recording time, screen and video out, but the MinoHD 120 is smaller (and more expensive.)

So unless size is the key, buy the UltraHD, right? Except if Chris's article is to be believed, the quality of image produced by the three camera's is notably different, with the MinoHD 120 doing much better in indoor light.

Apple has released an update to Final Cut Studio 3:

Issues addressed in this update include the following.

For more detailed information about the changes in an application, choose Release Notes from the application's Help menu.

This Saturday, October 24th, is the Boston Book Festival, and Ken Burns is one of the participants in a panel: Documenting History

Documentarians work to answer the question, “Who are we?” Ken Burns, lauded as “the country's most famous documentarian” by the Los Angeles Times, shows clips and talks about his latest film and book, The National Parks: America’s Best Idea. Journalist Scout Tufankjian tells how she reluctantly drove to New Hampshire in 2006 to cover a long-shot candidate named Obama. She stayed and became the only independent photojournalist to cover the entire campaign, chronicled in her book Yes We Can.

Unless you’re a movie director, or you’re working with a large crew on a project, this talk by Itay Talgam at TEDGlobal2009 is probably not going to have a lot of impact on your day to day behavior. And yet it is very compelling. In Lead like the great conductors, conductor Talgam shows the styles of different conductors and how they relate to leadership, authority, harmony and creativity within a group. And as the description says, it is also a charming talk. Well worth spending 20 minutes on.

I have an iPhone, but unfortunately, it's the 3G, not the 3GS - no video for me!

Still, ReelDirector looks interesting; it provides basic video editing capabilities; add a title, trim clips and add transitions. For $8, it's pretty neat, and the video's you can produce with it might even rival those we used to produce in Premiere 1.0!

And a demo video on YouTube:
Posted by Michael Murie at 1:09 PM 0 comments

Well it’s Canon news today. First the Canon 1D Mark IV was announced earlier this week. You can read about it at dpreview. It offers the same video support as the 7D:

At $5,000, it’s too expensive for me, but I was curious to see that it uses an APS-H sensor with a 1.3 crop factor; the sensor is larger than the 7D, but not full frame. Interestingly, when rumors were flying around about the 7D, some suggested that it would have an APS-H sensor. It looks like the rumor mill might have mixed up the two cameras!

The 1D Mark IV is expected in December. While it supports higher ISO than the 7D, I’m not sure that there’s any other reason to want to spend the extra money if your primary interest is video. I guess we’ll have to wait for more field reports and sample video.

Vincent Laforet has done another video, though it’s been taken down at the moment. You can see some other samples on Canon’s site.
UPDATE: It's on YouTube here.


Canon 5D Mark II firmware update coming
To many people’s surprise - okay then, mine - Canon now says that they will have a firmware update for the 5D Mark II that supports 24 and 25fps video. This is both expected and unexpected; there was clearly a big demand from users for support for those frame rates, and Canon had already shipped one firmware update that added Manual support. But it’s very unusual for Canon to update hardware like this. Also, there had been reports that Canon had initially thought about updating the frame rate, but then held it up because of increased jello effects (note: that’s a rumor.)

With the arrival of the 7D, and it's dedicated video function button and support for 720p 60fps, I was leaning towards the theory that Canon was going to replace the 5D sooner rather than later. Now with the plan for a firmware update, I can’t help but think that this means an update to the 5D is a lot further out, and that the firmware patch is an interim fix.

It's not expected until next year, which is interesting because all the conspiracy theorists - who thought Canon was holding off to protect their video camera business - like to imply that it's really easy to do. If that's the case, why announce it now, but not ship for three or four months?

Anyway, it will be interesting to see what they come up with; and I remain doubtful that they’ll add support for 720p!

Canon today announces that it is currently developing a firmware update to the EOS 5D Mark II to enable the recording of high definition 1080p video at 24 and 25fps. The decision to develop new firmware to support these features has been taken following feedback received from cinematographers and photographers. […]Canon currently expects the firmware update to be made available during the first half of 2010.

Canon 7D firmware and picture style
Canon 7D owners should check out Marvelsfilm’s blog. He’s been writing about his experience (and problems) with the 7D, particularly a problem with pattern noise. He also has a picture style that adjusts the video to better match video captured with the Sony EX1, and may also be better for getting a “cine” look:

This Picture Style, that can be downloaded to your camera with the EOS Utility, introduces a S-gammacurve that lifts the black levels is shadows and “low-mids” and compresses the highlights, resulting in an over-all increased latitude – and a decrease in contrast. This can be compared with a crossbreed of Cine gamma 1 and 4 that you find in the Sony EX cameras. Some viewers will translate the picture as “flat”, but it will give you much more control in post. Also, this profile is ideal for use with these particular 7D cameras that have problems with the Highlight Priority setting; the dynamic range of this profile has already been “moved” towards both highlights and blacks.
Since you still have control over the Picture Style settings, you can adjust the strength of the S-Curve by changing the Contrast value. Move it down to exaggerate the S-curve and move it up to flatten the S-Curve (more linear).
Link: Canon 7D Picture Style with Cine-gamma (S) Curve

Go on, Treat Yourself
Posted by Michael Murie at 1:44 PM 0 comments

Apple rolled out new iMac’s, new Mac Mini’s a new low-end MacBook, and a new Mouse. The iMac’s are interesting because:


The bad news: No Blu-ray. Can’t say I’m really surprised, and yet I had been hopeful!
Posted by Michael Murie at 1:18 PM 0 comments 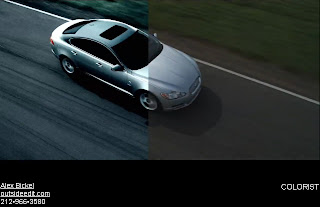 The Nike ad was also shot with the 5D, and he said that was really good to work with, so he felt the problem was solved. After his talk, he took out his iPhone and was showing before and after images from the Nike ad.
Posted by Michael Murie at 2:00 PM 0 comments