I've been sitting out the HD Disc wars (Blu-ray and HD DVD) since a) if you can't buy any hardware, then why worry, and ii) with two competing formats, it looks like a party I want to stay away from.

But then yesterday I was having lunch with a friend and I was telling him about the video I'd just finished and I was talking about how it would look better in HD because it was shot in HD rather than in the NTSC it had been downsampled to. And then I had this moment of realization; the HD Disc format I was going to go with would be determined by Apple; since that's the hardware I use for video editing.

Well for some reason, suddenly I got all excited about the idea of creating an HD disc and was wondering which format (if any) Apple was planning to support. If I had to guess, it would be Blu-ray, since it's Sony and Apple and Sony have a bit of a thing going from way back.

So today I did a bit of research; okay, I typed Blu-ray into a search engine and clicked on the first thing that came up. First thing I see; Apple to support Blu-ray.

If you read that page, it seems pretty clear that Blu-ray is going to toast HD DVD. But who knows for sure?

One thing I'm wondering; when will Apple come out with Blu-ray support? THey are supposed to annunce new Intel desktop's in a couple of weeks. It would be kind of cool to announce Blu-ray drives and support with those new machines (and it wouldn't be the first time Apple was a step ahead of the market in bringing new technologies to market just ahead of others i.e. SuperDrive.)

It's hard to know; there have been delay's with Blu-ray, and the players seem expensive still...but now I'm thinking I'll hold off upgrading my desktop machine for a while incase they do come out with new Blu-ray hardware/software in the next six months...
Posted by Michael Murie at 1:22 PM 0 comments 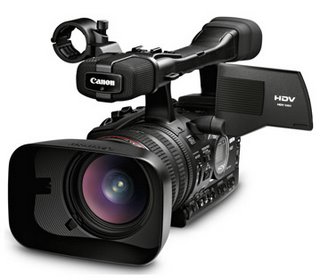 Wow! And the interesting thing; at that price neither accepts interchangeable lenses!

Not being in the market for that kind of expensive camera at the moment, I can't really get excited. Canon has a habit of coming out with really cool semi-pro video cameras about a year or so after Sony, and by that time, I've already made my buying decision. Bad luck for me I guess - and I'm very happy with the Sony - but it's still a little annoying that they couldn't get in the game a little sooner.
Posted by Michael Murie at 3:03 PM 1 comments