Capturing video for streaming with HDMI rather than Firewire

At today's Boston Media Makers meeting, Steve Garfield brought along a Blackmagic Design UltraStudio 3D [$945] to demo. He explained that if you want to stream video live from a video camera, it is getting increasingly hard to find cameras with Firewire ports - the way most people have been doing it for the last ten years. Now most of the video cameras output only an HDMI signal. 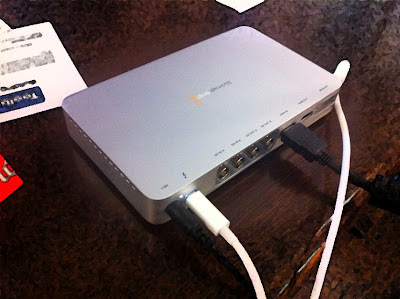 Sounds interesting but there's no explanation or video to show what was done or how.

He said that he didn't have to install any software and his web streaming software recognized the video input. He also said that Blackmagic offered some software for capturing the video, but he hadn't used that.

What web streaming software?
Having used a few I've found that not all video i/o devices work with all streaming programs equally.

Unfortunately, he didn't tell us that, and I was more interested in capturing the video - which Steve doesn't do and didn't really talk about - than streaming.

I think Steve uses The Pulse Network for a lot of his broadcasting.

You might drop him an email; I'm sure he'd tell you: http://stevegarfield.com

Firewire made it easy to stream video but USB bulk mode has ended that. Can I use any camcorder with HDMI out in conjunction with the Blackmagic box?

What version of Procaster are you using? The website says they added "experimental" support for Intensity Extreme in version 20.2.28, and improved in 20.2.69