I was amused to see this poster today at the mall for the AR Drone with the pitch "As Seen On YouTube."

The "As Seen On TV" logo's used to mean something - someone had to spend at least a little money to get a product commercial on TV - but getting something on YouTube hardly seems like a great distinction! 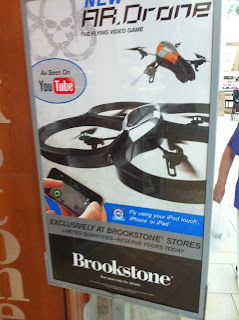 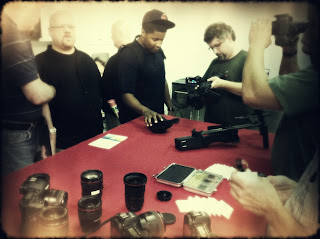 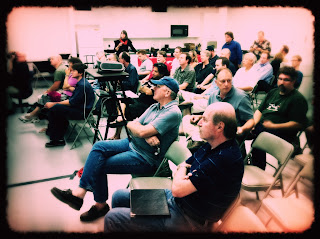 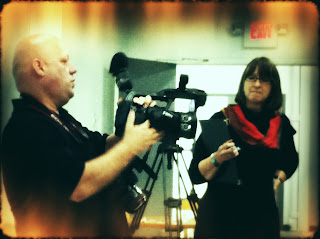 Redrock has a page up with their new nano DSLR rigs, which range in price from the $107.50 Grippit to the $467.00 RunningMan. The Stealth, Stealth Grip and RunningMan all include a body pad support, with the latter two including a handle grip. 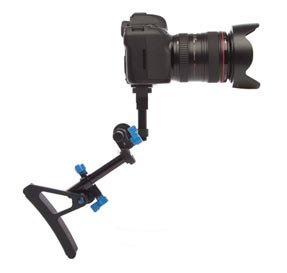 nano Stealth
It's almost impossible without trying them to figure out which of these might be the easiest/most comfortable to use, though I'm now more intrigued by the nano- Stealth. I suspect that in most situation's I'll have my left hand on the lens for focusing, and putting the right hand on the camera seems natural both for steadying the camera as well as having it ready to adjust aperture and shutter on the fly...so maybe a handle-grip isn't necessary.

Your mileage my vary... 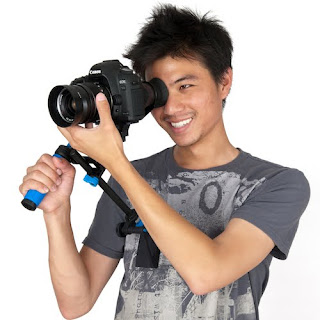 From Aug. 18th through October 15th, 2010, users of Panasonic P2 HD, AVCCAM and
DVCPRO HD camcorders can submit up to five videos for a chance to win wide-ranging honors, including the grand prize of an AG-HPX370 P2 HD Camcorder package.

HOW IT WORKS
Step 1: Shoot a video that showcases the innovative way that you are using your Panasonic professional camcorder.

Step 2: Upload the video (no more than 5 minutes in length) on the [http://www.ShootItShareIt.com] web site

Step 3: A panel of judges will choose a semi-finalist winner in each category. On Oct. 19th, 1st and 2nd place category winners will be posted online. From Oct. 19th through Oct. 22nd, the public will have the opportunity to vote for the Grand Prize winner. The Grand Prize winner will be announced on Nov. 3rd.

Nikon has announced the D3100, which adds 1080/24 and continuous contrast-detect autofocus to Nikons entry-level DSLR. Of course, how noisy it is while focusing, and what the rolling shutter is like remains to be seen. Of course, I'm heavily invested in Canon gear at this point, so I guess I should hope it's not very good, but the better Nikon and others do, the more it will drive Canon to improve their next camera.

Speaking on Canon's next camera, no D60 announcement (Canonrumors.com now says next week, but I don't believe them) though they did announce some new Powershots.

Sony also has new Alpha cameras coming, including the  Alpha A33, which is quite small compared to the NEX cameras, as DigitalRev points out.


[UPDATE: yesterday Canonrumors said August 26 is when the embargo on the 60D will end....today, "the EOS 60D will be available on September 22, 2010" Of course, both statements may be correct; it may be announced on the 26th and available September 22nd...]
Posted by Michael Murie at 9:00 AM 1 comments

Singular Software has now officially released PluralEyes for Premiere Pro for Windows. A beta version had previously been available. PluralEyes performs an automated synchronization of video and audio tracks based on matches in the audio track. It can be useful for dual sound recording if you don't want to use a clapper board or other method to sync the sound.

An introductory discount of 20% will be applied to the original price ($149 USD) if purchased before September 17, 2010. Students and instructors can take advantage of Singular Software's academic discount of 50%, which can be applied to individual purchases of PluralEyes.

PluralEyes for Premiere Pro is compatible with Windows® XP®, Vista® and Windows 7®. A version for Mac OS X users will be released at a later date.

A version for Final Cut Pro is already available.

Location information (and a registration page) is now up for this Thursday's BOSFCPUG meeting.

[I still wonder if the 60D will have been announced by then...]

BOSFCPUG: Web page
Posted by Michael Murie at 8:00 AM 0 comments

Just use some cheeseplate that I had laying around...

I hate do-it-yourself projects. Partly because I'm hopeless at electrical and mechanical engineering; if I can't do it with a screwdriver, hammer, glue and duct tape, then it's pretty much not going to happen.

But the other thing that frustrates me is how often I'll come across projects that "only cost $20," but are dependent upon the fact that you have some piece of unusual hardware or equipment lying around.

Case in point
I came across this video for a DIY Spider Trax Dolly based on the wheels from a skateboard and put together for $20.

Looked pretty neat. So I went down to Target to look at skateboards; the cheapest was $29.99. A second trip to Toys-R-Us turned up a $15 skateboard.

With that out of the way I went looking for "cheeseplate" like that shown in the video. A search on Google and Amazon turned up nothing even resembling it. Trips to two hardware stores and Home Depot turned up nothing except a plain sheet of metal which might have worked, though it was border-line too flimsy and would require some drilling (yes, I do have en electric drill).

A little perplexed, I went back to the video, and this time went to the actual Vimeo page it's hosted on (I'd originally seen the video posted on another blog.) There in the discussions were people asking the same thing. Turns out that the plate he "had lying around" was actually a Glidecam Camera Weight Plate. $14.95 from B & H with a 7 to 14 day delivery....so I ordered one ($18.30 including S&H)

B & H has Zacuto Z-finder's in stock

The supply of Zacuto Z-Finders has been somewhat erratic the last couple of months, and they are often on back-order, but I just noticed that the Z-Finder's are in stock at B & H (so I ordered the Pro Finder 2.5.)