The evolution of animation

I’ve been using Final Cut Pro for three or four years now. Prior to that I’d been using Premiere, but when Adobe – temporarily – abandoned the Mac platform, I switched. Coming to Final Cut, I didn’t spend much time really learning the program; I figured out what I needed to do - how to cut clips, apply transitions and effects, and add titles - and away I went. Over the years I picked up how to use the 3-Way Color Corrector (after going to a demo on using XDCAM with Final Cut Pro!) but I never spent any time learning more.

And I never got beyond Final Cut; I never did more than launch Motion, and didn’t even get that far with Color or SoundTrack.

It’s silly really, having these programs and not being able to use them to their full – or any - potential. After attending a recent seminar and seeing a demo of new features in these programs, it occurred to me that it was time to spend a bit of effort actually figuring out how to use these tools.

So I started with Motion.

Motion is a compositing and animation tool. It’s great for creating titles and effect sequences, but it’s unlike any animation tool I’ve used before.

The first real animation program I used was Director. In Director, animation is frame based. Put something in frame one, copy it to frame 2, move it’s location, then go to frame 3, and repeat. It works pretty well, and they later added tools for automating the creation of animation over a sequence of frames, but you’re still very much working on a frame-by-frame basis.

The next tool I encountered was Flash. It uses key-frame animation. Put something in frame 1, go to frame 10, create a new key frame, move the position of the object, and tell Flash to “Motion Tween” and it creates the inbetween locations for all the frames 2 to 9.

Keyframe animation is great for quickly moving something about. It’s not so good if you have something changing it’s shape as it moves (say a character walking, which is really a sequence of graphics) but even that can be worked around. It still took a little time to “unlearn” what I was used to doing in Director.

And now here’s Motion, which is essentially an animation tool. And yes, it has key frames, but Motion adds something new to the mix: Behaviors.

Want something to move across the screen? Attach the Throw behavior. Let me say right here that there’s something awfully disruptive about using the word Throw as a command in an application. To define the Throw, you set the starting point (in the timeline) and the end point, and let it “throw”. Now you can still sort of think of it as key frames (start and end), but it’s so much more – and so different to – key framing.

Behaviors are so powerful, that the book I was using to learn the program literally said for the first half; “Don’t worry about key frames.” And it’s true, you can do amazing things with Behaviors. Motion also includes a Particle System which makes it possible to do things that are tedious or even unimaginable in other animation programs. Think of it as a way to generate patterns of dozens or thousands of objects; for everything from smoke to bubbles.

I’m still getting my head around it.

I have the original Apple Pro Training Series: Motion

book, so I’ve been using it to get a better grasp of Motion. It was interesting using a book written for version 1 of Motion, with version 4 of the software. I got through 95% of the book without really noticing any differences; and 4% of differences were hardly significant; Layers are now Groups, and it now correctly guessed the type of mask applied to one kind of graphic. I did have a bit of a problem when one of the effects (lens flare) had been moved completely from where it was supposed to be, but I eventually figured that out too.

Unfortunately, the book doesn’t cover some of the newer features, like the 3D camera tools, but I found an online tutorial that helped with that. The book was a really good introduction, and even though I haven’t seen the latest issue, on the strength of the first one I’d recommend it for those looking to get a leg up on Motion.

in the hope that it will help me with the things I don’t understand now.

All in all, I think Motion is very cool, and if I can remember how to use half of the stuff that the book showed, then I’ll be happy! 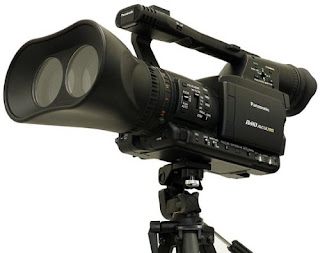 Engadget has a gallery of images of Panasonic's 1080p twin-lens P2 camcorder taken at CEATEC. Unfortunately, the camera is in a glass case, so they aren't that clear. It appears that there were no demonstrations, and there's been very little word on this camera since it first popped up back in April.

Is 3D the future? I'm not so sure, but perhaps Fujifilm's Finepix Real 3D W1 will be a harbinger of things to come: 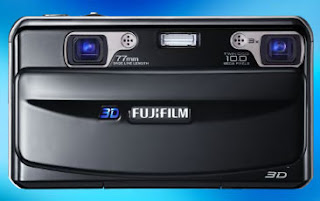 The camera's special LCD monitor displays the images in 3D (and you can buy a special 3D digital viewer as well.) Some of the blog reactions to the camera have been less than enthusiastic (the links below, not withstanding!) but the camera should be widely available shortly.

1. Two of the winners of the Nobel Prize for Physics this year are Willard S. Boyle and George E. Smith of Bell Laboratories, Murray Hill, NJ, USA "for the invention of an imaging semiconductor circuit – the CCD sensor." While CCDs are increasingly being replaced by CMOS in digital cameras, the CCD really started the digital image revolution.

2. Camcorderinfo.com doesn't review as many cameras as we might like, but they do get around to one or two...and they've just reviewed the Canon HV40. Tape is not dead yet! The HV40 is the latest update to Canon's popular HDV small camcorder line, unfortunately it seems it's only a small update: the only notable advance is the support for true 24p (rather than 60i video with a 2:3 pulldown used in the HV30.)

Since the HV40 is only a minor upgrade over last year's HV30, it seems that Canon isn't putting too much effort into its tape-based HDV models. The HV40's flash-memory counterparts have more sophisticated designs, better handling, and more useful features, suggesting that they are Canon's camcorders of the future. Canon's new top-of-the-line HF S series (HF S100, HF S10, and HF S11) also outdid the HV40 when it came to our video performance testing.

Know your fonts? How about your cheeses? Play Cheese or Font and see how good you are at telling one from the other. (I played a little, and I think I was doing about 50% at best when I realized that I wasn't that good!)

1. Mike Kobal has posted some good examples of rolling shutter for the Nikon D90, Canon 5D, 7D and Panasonic GH1. For each he first does a very quick pan, and then a slower pan. All cameras have noticeable problems with the very fast pan, but the slow pan seems fine for the G5, 7D and the GH1: Rolling Shutter compared: Nikon D90, Canon 5D mark II, Panasonic GH1, Canon 7D

2. Canon USA has posted an interesting article on using the 7D for shooting video: Harnessing the Power of the EOS 7D’s Video System

Traditional movies, shot on actual film, are shot at true 24 fps. Video from an EOS 7D, taken alongside actual film (which we anticipate will be done from time to time in Hollywood studios) is shot at an actual rate of 23.976 fps; it would have to be speeded up very slightly in the computer to exactly match film — normally, very easy to do.

It also links to the article; EOS 5D Mark II: How to Use Manual Video Exposure and the section: Shutter speed range in Manual Exposure shooting

3. A thread on dvxuser points out that the EOS Utility can be used to remotely control the Canon 7D - including adjusting focus - from the computer, suggesting it would be possible to do a kind of rack focus with the software. An interesting thought, even if you do have to drag a laptop around with you.

This is not really video related (even though Flash is used to play back a lot of video on the web these days), but Adobe Labs has announced that Flash Professional CS5 will enable you to build applications for iPhone and iPod touch using ActionScript 3. These applications can be delivered to iPhone and iPod touch users through the Apple App Store.

A public beta of Flash Professional CS5 with prerelease support for building applications for iPhone is planned for later this year. Sign up to be notified when the beta starts.

1. Canon Europe has posted some interesting technical information on the Canon 7D, and the WFT-E5 (the wifi transmitter that connects to the bottom of the 7D.)

2. Everyone seems to be shooting demo reels with the 7D. The latest example is: "Vienna is not Beijing" - 4 to 7 A.M short

3. Danfung Dennis is a freelance photojournalist who has covered Afghanistan and Iraq since 2006. He used a Canon 5D to shoot footage for a video on Afghanistan: Obama's War. You can read an interview here. Here's what he said about shooting with the camera:

I am using a new camera called the Cannon [EOS] 5D Mark II, shoots full HD video. I've custom built it so I can rig it onto a steady cam-like device, so that when I am running it will shoot a very smooth, steady picture.

It's a bit tricky because [the Marines are] running, you're running, you're wearing huge amount of equipment, and at the same time you're trying to stay very level and very steady. So it took a lot of practice. I believe I am the first to be using this set up in this situation.

I think more and more docs will be filmed like this because all you need is this camera, your own laptop and some editing skills, and you can put together your own documentary.

4. It looks like Apple will be announcing new iMac's and Mac Mini's shortly (current supplies are limited and some online ads have slipped out.) I'm still hoping for Blu-ray support, but I've been burned before. With Snow Leopard supporting multi-cores more efficiently, perhaps Apple will do something interesting in processors.