But first, Canon has released firmware that it says fixes – or mitigates – the “black dot problem” in the 5D Mark II. First reports are encouraging.

The firmware update doesn’t add any features – like the ability to manually set aperture and ISO while recording video…a feature people using the 5D MkII for video capture would just love to have. Unfortunately, I think they are wasting their time waiting…they will have to wait for the Mk III or the 60D for new features.


iMovie 09
Apple didn’t announce much at MacWorld, but they did roll out iMovie 09. While perhaps not a serious editing tool, it can be useful for quick editing, and they added one exciting addition; image stabilization

New video stabilization in iMovie ’09 analyzes how much your camera was moving while you were recording, then automatically reduces camera shake. Stabilize on a clip-by-clip basis or analyze all your video for stabilization […]

iMovie ’09 lets you adjust smoothness with a simple slider, so you can bring back some natural camera movement for effect where you need it. iMovie also identifies moments when the camera was so shaky that the footage can’t be fixed. It marks those clips with a squiggly red line, so you can choose to hide them.

This feature appeared first in the last Final Cut release, and it’s exciting to see it appearing in iMovie.


Over at CES, Canon, Sony, JVC and everyone else have been rolling out new video cameras. Canon and Sony in particular announced a boatload of new cameras.

The highlights for me:

Canon HF S10 and S100
These two cameras are at the “high-end” of the low-end consumer camcorders that record to flash memory:

With larger DigicDVIII, 1/2.6" CMOS Sensor and larger 58mm lens, there’s the impression that these two cameras will have impressive low-light performance. 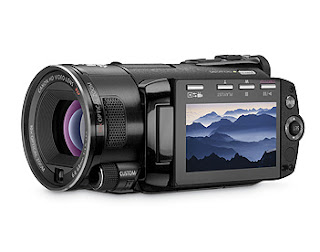 Sony
The two Sony cameras that appealed to me were the HDR-XR500V and HDR-XR520V which also promise improved low-light performance with a new chip (the new CMOS chip is only in these two cameras.)

I was also intrigued by the Webbie HD cameras, the MHS-CM1 is available now, and looks like a very small regular camera, while the MHS-PM1 is coming in a couple of months and has a swivel lens. Both record to flash memory at 1400x1080p with a 5 MP sensor. Unfortunately, they use Sony’s Memory Stick.

Interestingly, Sony was evidently interested in Pure Digital’s Flip Video, and was thinking of purchasing Pure Digital, but it didn’t work out.

While neither camera is going to offer great image quality, I’ve been using a couple of old DV camcorders to record secondary angles and I think these cameras might make for useful replacements.
Posted by Michael Murie at 11:15 AM 0 comments