Sony has posted a video on their 4K roadmap. This is a video of lecture by Hugo Gaggionoi, CTO, V.P. of Technology, Sony Broadcast & Professional Solutions. Hugo gave amost exactly the same lecture at a recent SMPTE meeting in Boston.

This talk makes it clear that Sony is going after RED. There are even a couple of veiled references to RED; specifically a reference to the fact that some people who claim to be doing 4K really aren't because they are using a single chip camera with a Bayer pattern. (check the video at about 7:10) 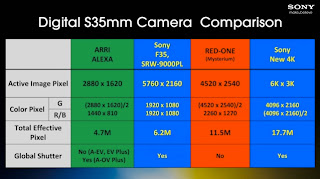 Sony's own "4K" roadmap includes a new sensor called the Q67 that has 17.7M Pixels (4K x 2K) in a new color filter orientation, giving 100% of green, 50% blue and red, which they say is 67% of the image information. They claim that competing Bayer pattern chips supply only 33% of the image information (this is a bit misleading, because we're talking color accuracy; brightness will be accurate.) 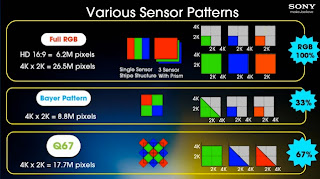 Sony's announcements - they haven't formerly announced a product - has prompted Jim Jannard of RED to post "Sony has just validated 4K as the future. We like that."

Seeing that post, I couldn't help thinking of the ad that Apple ran back when IBM entered the PC market. For those who don't remember, Apple practically owned the PC market with the Apple II, until IBM announced their PC. IBM/Microsoft promptly took 90-95% of the PC market and has retained it ever since. Apple's never recovered in the PC market; recent successes are more due to establishing new markets; iPod, iPhones. 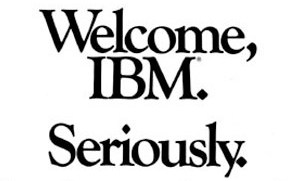