The panel made it clear that 24fps was mostly an accident. Mark told the history of how 24 came to be because when sound was added they needed a constant speed; it didn't really matter what the speed was. Trumbull, known for amongst other things his work on 2001: A Space Odyssey, is a big fan of higher frame rates, though he acknowledges that the "film look" is what many people expect to see. 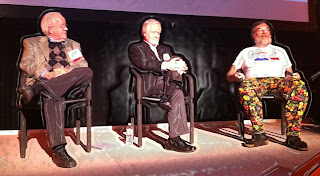 There is absolutely nothing special about 24 frames per second. There is no particular psychological reason for it [...]

But he found that if he did a weighted average of what the big theaters and the little theaters were doing, he came up with 24. And 24 happened to be, for the number of frames there are in 35 mm film, 90 feet per second, which was a nice round number.

I love high frames rates because I like to make simulation rides and reality based experiences that are as realistic as they possibly can. But 24 frames is what I call the texture of feature films, and I don’t think anybody is really ready to see a feature film shot at 60fps. That was one of the tests I did when I was at Showscan; we shot a dramatic short film with sets, props, actors, the whole thing at 60, and it was very disturbing because it was like live news.

But as you go bigger, like Imax, the displacement from frame to frame is increased and it doesn’t fuse as easily, so fast motion has always been a no-no in Imax. When you take a 35mm movie and blow it up to Imax, which is happening regularly these days, I find it very hard to watch because it doesn’t fuse any more, particularly on fast action.
- Douglas Trumbull

I always distinguish between strobbing and juddering. When you play with the shutter, when you start to see the ball jump, that’s strobbing, it’s regular, but there’s a jerk in it. The judder comes when you then interfere with that to convert that 24p to 60 using 3:2 pulldown. Now that regular motion gets a kick in it because of the 2:3.

Judder is something that our eyes and brains are very sensitive to. The big difference between the 14 foot-lamberts on a movie screen, and the equivalent of 60 or 70 foot-lamberts that you can have on a television screen, suddenly judder leaps out at you. And on a big HD screen it can be pretty painful.
- Larry Thorpe

What Tips Do You Have For Shooting At 24p?

Depth of field: If you’re following fast action, you blur the background. You get the background out of focus and now when it blurs or judders, it doesn’t trouble you. And your eye and brain are drawn into the foreground action, which is exactly what the director wants.
- Larry Thorpe

Well there’s an old trick that’s used in the movies all the time, is to have some foreground object that isn’t so blurred with your panning. And you’ll see it in movies if you start watching for it. You know; there’s the entrance to the café, the camera wants to pan over to the table where some actress is, and a waiter will come by in the foreground while the camera pans to give some component of the screen that’s not blurry.
- Douglas Trumbull

Doug mentioned the viewing angle, or the size of the image, when Rent was done as a Broadway theater production that was sent in to movie theaters, it was shot at 24p, but it was shot by a video crew, and everyone was looking at little monitors, and everyone loved the look. And then it got projected on giant theater screens and it was strob, strob strob, with the moving feet, so it would probably have been better to have done that one at 60.
- Mark Schubin

One last piece of advice; Get a copy of the Amercian Cinematographer Manual and read the panning section.