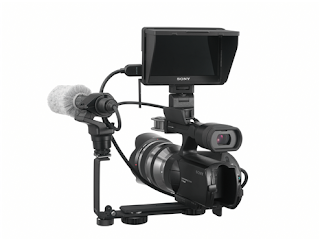 Sony CLM-V55 LCD Monitor
Yves Simard at Crews.tv has posted a review of the Sony CLM-V55 LCD Monitor (which won't be available until March.) He includes a video showing it working on a Canon 5D Mark II, and though there are a few gripes (a little vignetting on the sides, no false color for exposure, lack of hot buttons ) it looks like a very nice monitor; color reproduction is good, okay sound viewing angle is very wide,color peaking for focus and he said it's mostly usable outside in bright light as well.

It only has HDMI input, but for DSLRs users, that's probably fine.

Marshall's 5-inch V-LCD50-HDMI [$516.35 @ B & H] offer's more features - including false color - and looks a little more rugged, but if pricing on the Sony is lower it may be worth considering.
(No price has been announced by Sony yet.)
Crews.tv: SonyV55 DSLR Monitor