Lenses for the Sony PMW-F3

At last weeks Pub Night at Rule Boston Camera, Sony PMW-F3 specialist, Joe Schimizzi, spoke at some length about lens options for the PMW-F3, and the PL lenses Sony is selling with the camera.

Joe opened by saying that lots of people ask why Sony won’t sell the lenses separately, when in truth they are; “but you get a free camera with your purchase!” he joked.

Another question they often get asked is; “who is making the lenses?” Acknowledging that the lenses aren’t made in a Sony factory, Joe said that the lenses are completely Sony designed “from soup to nuts, from the very front element to the back element.” He went on to add “Do they manufacture them in the Sony plant? No, […] we use somebody else’s shop. But they wouldn’t want to speak to those lenses being their own children. They’re ours. We literally just use their shop for the ability to manufacture them, which is why they are Sony lenses.” 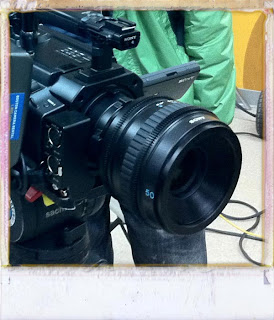 An objective of the design of these lenses was to create good quality lenses that weren’t too expensive. Sony focused on geometry; making sure that, edge to edge, the lenses have a minimum amount of barrel distortion and focus fall-off.

Joe observed that lens design is as much an art as it is a science, and “all the science, all the paperwork all the math, all the equations, they don’t do anything for you. It gives you an idea of where you’re going to land but until you physically manufacturer and coat that lens, you don’t know [what you;’ll get.]”. He went on to say that this is the reason that lenses remain expensive, and haven’t seen the “smaller, faster, cheaper” trend that has been pushing camera design.

Comparing the Sony PL lenses to others, Joe said “it’s absolutely comparable to a Compact Prime. If you’ve got two brand new lenses that are coming off the line that are 100% on spec I say that they’re kissing cousins.”

When reducing chromatic aberration, the camera analyzes the high-lights and performs a sort of edge detection, which is similar to focus peaking. This technology originally appeared in the Sony PDW-F800 and worked with some Fujinon and Canon lenses.


Lens Mount
The PMW-F3 has a native “F3 mount”, which will be used for future zoom lenses, and comes with a PL adapter that plugs into that F3 mount. Joe demonstrated removing the lens and the PL adapter, and pointed out that because you have an energized optical block it’s going to suck dust that attracts particles, so you need to be aware of this and think about cleaning it regularly (he recommended a blower brush.)

Also, the HD-SDI signal has the lens meta data embedded in it, and this is also written to the XDCAM SxS card as part of the XML data. Most users don’t need to know that information, but it can be useful for high-end VFX work 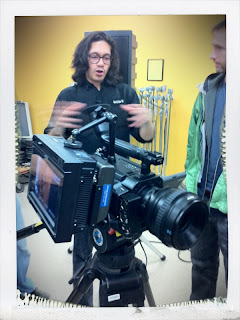 Joe Schimizzi
PL Lens Issues With Other Cameras
There have been several reports on the web of the Sony PL lenses not working with cameras other than the PMW-F3. Sony is aware of this problem, though they say that it seems to occur on a lens-by-lens / camera-by-camera basis; a lens may fit on one ARRI Alexa or RED, but not on another.

The official line is that the lenses perform exactly to specification; they work on the PMW-F3, and on any other Sony PL camera, “if you take those and put them on another camera, I never said that wasn’t going to happen, it’s also why we don’t sell them separately for their own sake.”

But, Joe denied that Sony intended to make the lenses proprietary, rather it is a problem that “once you get to the level of microns worth of tolerance, it’s very hard to have perfect marriages with everything.” It may also be because ARRI and RED won’t share with Sony – a competitor – their lens mount specifications, making the PL standard sound like one of those standards that’s not really a standard.

He did add that Sony has been looking at the issue, though Sony is not known for quick turn-around on such things, and the recent disruptions in Japan have further delayed any response.


What About The Zoom Control?
Someone asked why the camera has a zoom control on it, and Joe explained that another goal of the camera was that it be part of the EX family – essentially the EX3 with a large sensor. For that reason, they always intended to produce a video lens similar to the one offered with the EX3.

They are working on that lens, which should be 18mm to 250mm (14:1), include stabilization and servo control, and have a minimum aperture from 3.5 (at 18mm) to 6.3 at 250mm. When asked, he said that creating a fixed minimum aperture would have substantially increased the cost.

They are currently testing prototypes, and expect the lens at the end of the year, or early 2012. With the lens attached, the PMW-F3 will “look like an EX1 that hit the water and swelled to about 3 times the size”

There is another very short zoom lens being developed which should be availablein July. It’s an 11 to 16mm zoom, which is the equivalent of walking 10 to 12 feet, and has a minimum aperture of T 3.5. It may actually be sold as a “variable focal length” lens rather than a zoom lens, and Joe thinks it will be an excellent tool for Steadicam use.


Adapters And Still Lenses
Joe talked briefly about the option of using still lenses – with the appropriate adapter – on the PMW-F3. He said that they offer a great way to round out your lens collection, but stressed that you should do lens tests and be aware of how you will be using your footage.

Still lenses he said, tend to breath more than video lenses (i.e. the focal length of the lens can appear to change slightly as the focus is changed.) This is often very small and may not be noticed, but if the image is being projected on a large screen, the effect can become more noticeable. “That’s not to say there’s not excellent lenses out there,” he said, but you should be aware of it, and test for important projects.

Joe concluded “your camera just records your image, your lens makes it.”