Intense Guessing
Right at the beginning, Philip acknowledged that he knows nothing official about what's coming in Final Cut Pro X, other than what we all saw at the SuperMeet at NAB. He's been guessing and reporting on hints and whispers about Final Cut Pro X for more than a year now, and he's just a little bit obsessive about it "I like a mystery" he said. He even got a 720p copy of a video of the SuperMeet presentation, and went through it with a fine-toothed comb, catching bits that just flashed by for the rest of us.

It's pretty safe to say that the only people that know more about Final Cut Pro X are the actual beta testers and Apple employees, and few of them are talking.

The most important things about Final Cut Pro X according to Philip: it's rewritten from the ground up, it's 64 -bit, it abandons QuickTime, and makes wide use of Meta Data. It will also use Grand Central Dispatch (so all the processor's cores will be used) OpenCL and ColorSync (hopefully solving color issues that currently exist.)


Hardware
Philip had only one recommendation about hardware; get as much RAM as you can, though he also mentioned that it won't run on early Core Duo Macs. It will run on Core Duo 2. 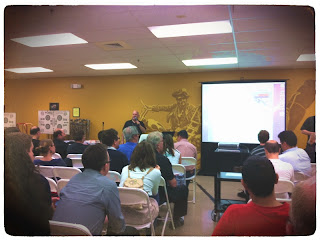 Dan Bérubé addresses the crowd
Bye Bye QuickTime
Final Cut Pro X doesn't use QuickTime; it's built on AV Foundation, which is the same toolkit as iMovie for iPhone is built on; though not regular iMovie, which he says is still built on QuickTime. This is also, according to Philip, one of the reasons why Final Cut Pro X is NOT iMovie on steroids. Final Cut Pro X also makes use of the graphics development environment Quartz Composer.

Even though QuickTime is gone, you'll still be able to use .mov files; though as he said, you shouldn't be using .mov files for distribution anyway.


Third Party Software
Any existing third party plug-ins that are 32-bit will have to be changed and recompiled to work in Final Cut Pro X. This is evidently a comparatively easy change for developers. He thinks FX Plug Filters will survive, but FX Script will probably not.


Meta Data and Projects
Philip's "thing" is Meta Data, and he's pleased to see that Final Cut Pro X uses Meta Data. Uses it so much, that it actually replaces some features in the current version of Final Cut; like Bins. It also seems to do away with the idea of Projects, and saves everything in a database. Keywords replace Bins. Tools for adding keywords easily have been added, and content analysis will scan content during ingest, identifying shots with two people, one person etc.


Is this a good thing?
Philip is very upbeat about most of Final Cut Pro X, but one thing he's concerned about is the lack of hard audio tracks. What happens when (if) you export a project to a sound editor? How do you link to SoundTrack Pro? Does SoundTrack Pro still exist?

Several things were shown briefly or only hinted at, so he couldn't really tell what the impact of those features might be. The Magnetic Timeline looks like it would be great at the beginning of creating a project, but might cause problems as things get locked into place and you're making small changes.


Gone in 30 days
He's pretty sure Log and Capture is gone; if you are still editing with tape, you'll need to use another tool to get the video in. Gone is the dedicated viewer; he doesn't see that as a bad thing, and I can see where he's coming from; do we really need to look at one window, then switch to another? The only time I can see that is when doing color correction...


The Unknown
While Apple talked about Resolution Independence, they didn't talk about Frame Rate Independence; he hopes that it supports this. If Projects are gone, how do you move Sequences (or "projects") from one machine to another?

Philip's not sure about the status of the other applications. He thinks there's a good case for Motion and SoundTrack Pro to continue, and he suspects they'll be included in the $299 price. He also thinks that Compressor will continue. He thinks the Media Manager is gone.

He's not nearly as sure about Color, because he thinks most of the features the average user wants from Color are now in Final Cut Pro X, and anyone who wants more is probably already using something else like Resolve.

DVD Studio Pro is gone, and no, there won't be a Blu-ray Stuido Pro.


Educated Guesses and Rumors
There will be more sophisticated animated titles in Final Cut; you won't need to use Motion for animated titles. He's pretty sure that Gesture Support will be included, and you'll want to get a trackpad, though he does believe what Randy Ubillos said at SuperMeet that you can do everything from the keyboard.

He's also pretty sure that there will be a SoundTack Pro.


In conclusion
Philip is excited and optimistic about Final Cut Pro X, even though it actually replaces some of the tools his company sells. For the pros that say it's just iMovie Pro he says no; it has a different architecture, and adds many, many features that iMovie lacks. For those who see it as a change in paradigm, I think he'd say that a) who said the old way is the right way?, and b) there may be only 100,000 people working in broadcast film and television in the world, but Final Cut Pro currently has over 2 million installs. 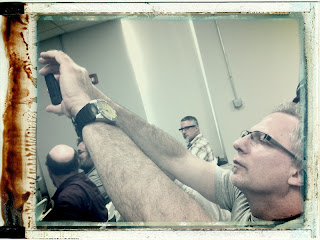 Rick Macomber takes a picture at the meetup

Adobe CS5.5
Unlike the SuperMeet in Vegas, Adobe did get to follow Final Cut Pro X, in the form of a short talk and demo by Yan Shvalb. Yan gave a talk at a previous meeting, and he always shows well crafted video that includes a lot of timelapses and special effects; many of which are so subtle you don't notice until he points them out.

Yan primarily demoed the features and operation of the Warp Stabilizer and the Camera Lens filter, two new tools in After Effects CS5.5.

Saying that he's tried nearly every stabilization tool that's available, Yan said that the new Warp Stabilizer is the best, and he demoed using it to remove motion, as well as Rolling Shutter from footage. He also demoed the Camera Lens filter, that makes it possible to add blur to video that looks more like it was created by a lens, rather than equally applied to an image by a blur filter.


The most interesting thing Yan said "I haven't shot interlaced for the past four years."


Show Your Shorts
The evening finished off with three shorts movies produced by audience members and a raffle (discussed in a previous post.)

Paul Antico showed the trailer for his "The Visualmakers" project, a documentary that is a stirring tribute to independent filmmakers. If the final project is half as good as the trailer, it'll be awesome! The Visualmakers - Preview/Trailer is here

A third piece, a funny music video, was also shown, but unfortunately I missed the details about who made it, or even who was in it.

Thanks for the update!