Sony held it's NAB news conference today, and as expected, announced a 4K camera; the F65. (And expect the price to be very expensive...)

You can see the product page here: Sony F65 Sony F65
F65 Features:
There might be some confusion about 4K and 8K and so on.

The pixels of the sensors in CMOS (and CCD) chips can't measure color, only brightness. To measure color, a color filter is placed over the top of each sensor pixel, but it can only measure one color; either red, green or blue. Ideally, you'd have at least one sensor pixel for each of the primary colors (the Sony F35 has a single chip with two sensor pixels per color, per final pixel, but it's intended to create a 1920 x 1080 image.) With three pixels per color you take 4096 x 2160 (x3) and find you need a 26M sensor.

Many chips only use one sensor pixel per final image pixel, and use the Bayer pattern to recreate the color. But when you do that, your color accuracy is compromised.

The F65 camera has 20M pixels according to the current literature [Note: in an earlier talk, Sony implied it was 17.7M (See: Welcome to 4K Sony, Seriously).] The RED Mysterium as another example, has 11.5M pixels.

Sony is careful to say that this camera "is the first in the industry that has full 4K output on the green channel, luminance." So it doesn't have three pixels for each final pixel, and it doesn't have just one; and it doesn't use the Bayer pattern. It uses a different pattern, with one green sensor pixel for every pixel in the final image (See: Film & Digital Times article contains a diagram showing the pattern.)

On the projection side, Sony said that there is already an installed base of more than 7000 4K digital projection systems world wide. 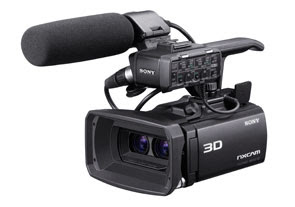 Sony HXR-NX3D1
The HXR-NX3D1 looks like the professional version of the previously announced consumer HDR-TD10.


The primary hardware difference appears to be the audio module (I assume it's detachable.)


The PMW-TD300 is a much larger, shoulder 3D camcorder. 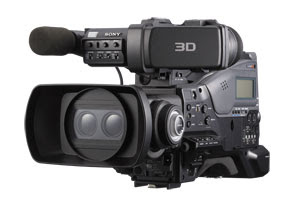 
Sony also announced the SRMemory Recorder and new OLED screens. Also mentioned at the event; Zach Jarosz of Freemantle said that The X Factor will be the 1st TV show to shoot with the Sony PMW-F3

[UPDATE 9:00PM: The explanation of the sensor pixel pattern of the F65 was rewritten.]
Posted by Michael Murie at 8:37 PM