Sony PMW-F3 News
Sony has confirmed that a future free firmware update for PMW-F3 will support HDMI output and HD-SDI output at the same time.

DSLR News Shooter has pictures of a prototype 18-252mm lens for the F3, as well as an LCD loupe (which looks sort of similar to the one that will be coming on with the NEX-FS100.
Sony shows off prototype zooms lens and viewfinder add on for the F3

Sony NEX-FS100 Demo
ProVideoCoalition has a video with Sony’s Juan Martinez showing off the new camera. Most interesting of all, he also shows a Birger Engineering Canon EF to E-mount adapter in operation on an NEX-FS100. Birger has been developing a similar adapter for the Panasonic AG-AF100 (and the Micro-Four Thirds mount.) It's taken a bit longer than expected to actually get them into production, but here's hoping they are close. Price of the Micro Four Thirds adapter was quoted as being abut $700.
ProVideoCoalition: Sony’s Juan Martinez shows off the NEX-FS100 AVCHD

Birger EOS Mount: Dan Chung at DSLR News Shooter has video of the Birger EOS to E-mount adapter as well. Erik Widding of Birger Engineering demonstrates the latest working prototype of his Canon EOS to Micro 4/3 and Sony NEX adapters. Says it will start shipping at the end of May.
DSLR News Shooter: NAB 2011 – BIRGER ENGINEERING DEMONSTRATES WORKING EOS TO AF100 AND NEX FS-100 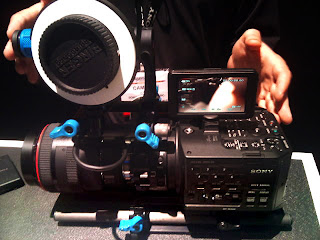 Everything announced at NAB will not be available until summer. Why not just make NAB in summer when everything is ready?
@justinb72

Software Scopes for Mac
Divergent Media is showing ScopeBox 3, software-based scopes for editing. They are dropping the price from $700 (original release) to $99.
ProVideoCaolation: ScopeBox 3 delivers software scopes for Mac for only $99


SmallHD 4" monitor + Viewfinder
SmallHD has announced a 4" monitor ($549) that will have an add-on viewfinder option, turning it into an EVF for $749.
SmallHD:DP4

Not the year of DSLR?
Last year's NAB was widely reported as "the year of the DSLR." This year, not so much. With nothing new from Canon (or Nikon or Panasonic), the attention seems to be on the large sensor video cameras; the Panasonic AG-AF100 and the Sony PMW-F3, NEX-FS100, and of course, the new F65.

Let's face it, though Canon has announced new cameras in the past year, the video capabilities of their DSLR's haven't improved at all since 2009.

This may be the year of EVF's, and there is lots of gear that works with DSLRs, but there's little excitement about the camera's themselves.

NAB tinged with sadness, DSLRs aren't dead, but the buzz most definitely is, all feels a little hundrum around the booths
@elskidblog

There isn't a camera on earth I am as excited about as a DSLR. Plainly because DSLRs are the only ones I can afford!!
@EOSHD

Its NAB! People not "Little Handheld HDSLR Cameras Show" why would ANYONE be surprised there was no 5DMK3 announced? B = Broadcasters!
@chrisfenwick

Pictures from the exhibition
This image of a Sony NEX-VG10 on some kind of dolly makes it look like it's going roller blading. It appears in Sony's Facebook picture library (along with several other pictures): NEX-VG10 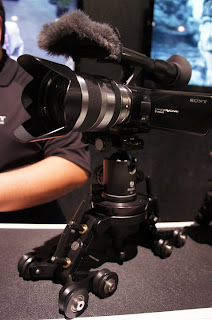