Those aren't the two most important details, but they are pretty important! Apple rolled out a preview of Final Cut Pro 10 at tonight's SuperMeet. Since I wasn't there, I'll leave it to those who were to tell you all about it, but it certainly sounds interesting. They seem to have taken the UI of iMovie and Final Cut, thrown them together, and added lots of features (rolling shutter, audio syncing, etc., etc.,) 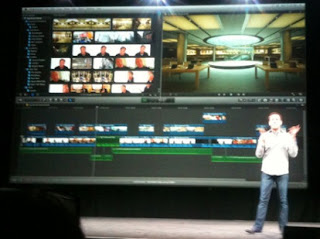 Rob Imbs posted this short summation video on TwitVid: Here's the wrap up.


Andrew Reid at EOSHD has already posted his thoughts:


It is an absolute revelation.

With one click colour grading, Open CL and all new 64bit engine, no rendering, no transcoding, 4K support and able to take advantage of more than 4GB RAM for the first time, Final Cut Pro X has been rebuilt from a blank sheet of paper.

It looks like iMovie on massive steroids. It is NOT a consumer tool though, no worries.
@IAmNeedCreative

What about Motion? Compressor? SoundtrackPro? Color? Looks like iMovie Pro to me. Not impressed yet.
@chrisfenwick


“Fully color-managed Final Cut based on colorsync.” “Resolution-independent playback system” Up to 4K formats. To be able to deliver that, “we’re leveraging Grand Central Dispath.” You can use all 8-cores. Background rendering built into application.


Ramping and changing speeds of clips can be done right within the timeline, doesn't damage the timeline. Audience erupts in excitement.
Doing color correction now in the timeline. This has been COMPLETELY! re-designed. I feel bad for all the plug in companies.
@robimbs

Ryan Koo at NoFilmSchool has a list of the features shown/mentioned:


The “pro version of iMovie” is sort of an apt description, but only if you really emphasize the “pro” part. In my own estimation so far (and from the applause in the room), pro editors are on board with it.


Philip Bloom posted his thoughts too:


I haven’t used it yet so the the proof will be in the pudding but I am very much looking forward to it. Open minds are the best! ...

The price is crazy cheap at $299, that is actually slightly worrying as it is veering into consumer pricing…as long as it stays pro…PLEASE


Finally
Having seen all this, there's a lot of questions unanswered; what about the other apps - Color, Motion, Soundtrack Pro - are they gone, barely touched, or are they being upgraded too?

I have to admit, from a distance - since I only followed this on Twitter and the live blogs - I now feel somewhat underwhelmed. I was expecting a revamped interface and lots of new features (I just didn't know which ones!) But I guess I also expected something else too. Cloud based editing or touch/iPad interfaces or something like that.

I guess I got too wrapped up in the pre-show buzz.

And it was just an hour. SuperMeets usually go on for twice that...did they really need to boot the first half of the program?
Posted by Michael Murie at 11:51 PM