This is NOT iMovie Pro, in 20 years of editing I haven't seen this much innovation as in FCP X
@danrubottom 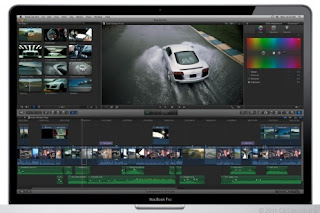 Larry Jordan - who saw almost exactly the same Final Cut demo six weeks ago, so had a bit more time to get his jaw up off the floor - offers his views on what happened, along with some comments from Apple reps and an interesting perspective:


Somehow, I managed to sit in the Apple executive section of the hall. In front of me was Phil Schiller, Senior VP for Worldwide Marketing. The head of PR was sitting to his right. The two lead engineering directors, or VPs, were sitting on either side of me. I was surrounded by top-level executives from engineering, PR, marketing, product management — literally a dozen extremely senior executives were sitting in the front two rows.

Apple would not send this level of executive talent simply to watch the roll-out of a product that they did not care about.

He concludes with some his own remaining questions. This is probably the best report out there on the meaning of this event.
Larry'sBlog: The sound of 1,700 Jaws Dropping


Chris Fenwick, who has previously expressed reservations about the direction of Final Cut, isn't particularly impressed, and is concerned about whether you'll be able to switch between apps easily when you need to:


So far, we don’t know how FCPX is gonna work with other apps. Does it care? Is a file a file? We don’t know. As an editorial machine. we don’t know. I will tell you this. Much of what I saw tonight looked a lot like iMovie and I am NOT an iMovie fan at all.


Scott Simmons at ProVideoCoalition offers his thoughts on all the features demoed, then puts together a list of questions he has (What about 3rd party plug-ins? What about XML and EDLs in and out of FCP X? etc) and concludes:


This list could go on and on. It’s also important to note that many of the whiz-bang features have been around for quite a while on other NLEs. We need to keep the reality distortion field in check.

PVC: FCP X is shown to the world. Flashy things are seen, questions are asked

Screen shots
The Loop has a collection of product screen shots, even though Apple doesn't seem to have anything on their site yet: First screenshots of Final Cut Pro X


Apple says ‘stay tuned’ for other Final Cut Studio apps” There you have it. Randy DID smile when I asked.
@jdalrymple

Video
Emmanuel Pampuri has posted a 20 minute video taken at the event. Gives you a flavor of it if you weren't there!

Michael Rose at The Unofficial Apple Weblog reports on the event (much of the reporting is based on the Photography Bay live blog, and @fcpsupermeet twitter reports)


FCP X features resolution-independent playback all the way from SD up to 2K and 4K formats. It now leverages Grand Central Dispatch to take advantage of all cores on the Mac plus the GPU. The crowd goes wild, especially as Steinauer suggests that the ever-popular render bar will now be a thing of the past.


Josh Lowensohn writes up the event news at CNET, noting that Final Cut Express is gone, and wondering about the other apps:


Still, what is likely to be of most interest to longtime users is the future of Final Cut Studio and Final Cut Express, something Ubillos effectively said was done for during tonight's introduction of Final Cut Pro X


Vincent Rozenberg lists what appealed to him, and offers this summary:


My quick take: Of course I have to touch it but the specs are quite promising. My core business is doing TV shows and we have a quick turnaround. So Background rendering, native AVC/H264 editing and the auto corrections sounds very handy to me when you have to output 2/3 TV shows a week.

VincentRozenberg.com: Final Cut Pro X! (so no FCP8 or 9)


In my opinion this update was necessary in regard of the performance issues with files from HDSLR cameras and 4k. Apple did a great job with this new version and made incredible improvements with background rendering. We have to wait and test, how this new interface is useable for professional video editing.


Sorry but it looks like "Final Cut 'Not So' Pro" to me.
@chrisfenwick

FCP.co collects together a bare-bones feature list, and posts some photos from the event: Welcome to the new Final Cut Pro X - On the App Store in June for $299

People stop bitching about FCPX, it looks awesome & very professional & is not amateur at all
@ninoleitner


[Make sure you also check the posts from yesterdays entry, especially the live blog from Photography Bay: Final Cut Pro 10 - In June for $299) ]