ARRI announced new cameras, third-party software support for ALEXA Log C and ARRIRAW, and - most interestingly for me, because I might *actually* be able to afford one - LED based fresnel lights.

ALEXA M
The ALEXA M splits the camera head from the body, producing a device ideal for mounting on 3D rigs and jibs. The head and body are connected with a fiber optic cable that can also be used for powering the head, depending on distance. The backend provides various recording options; images, sound and metadata can be recorded to SxS cards or external recording devices. The ALEXA M has a PL mount and works with all existing 35 mm lenses

ARRI is planning to present working prototypes of the ALEXA M at IBC 2011 (September) with production in 2012.

ALEXA Studio
The ALEXA Studio has a quiet mirror shutter and an optical viewfinder like the ARRICAM Studio, with the same control panel and buttons as the ALEXA Plus.
The viewfinder is a completely new development, which accepts both 435 and ARRICAM style eyepieces and viewfinder extensions and promises a high resolution, high contrast image with true colors and little geometric distortion. The optical viewfinder can be removed and replaced with the ALEXA Electronic Viewfinder EVF-1.

Due for release before the end of the year, the ALEXA Studio - with its 4:3 sensor, optical viewfinder and other high-end features - is "positioned to become the premium camera for spherical and anamorphic feature films and commercials." Cost, ~$130,000!
ARRI: New ALEXA cameras on the way

On Twitter
Have to be honest, the Alexa ArriRaw footage blows the Epic footage out of the water.
@seanbagley


The Foundry to support ALEXA in NUKE and STORM
"The coming months will prove to be exciting times as support for ALEXA Log C and ARRIRAW is delivered in The Foundry's NUKE and STORM product lines; it's a pleasure to publicly welcome The Foundry as a new and highly valued member of the ARRI Partner Program"
ARRI: The Foundry announces...


RV adds support for ALEXA
Tweak Software, maker of RV - a next-generation image and sequence viewer for VFX and animation artists - will collaborate with ARRI to integrate high dynamic range color support for ALEXA into Tweak's tools for playback, dailies and transcoding.

Tweak's development team has fast-tracked ALEXA Log C and ARRIRAW support into RV in time for an NAB preview, with a release planned soon after.
ARRI: Tweak Software unveils support for ALEXA and ARRIRAW 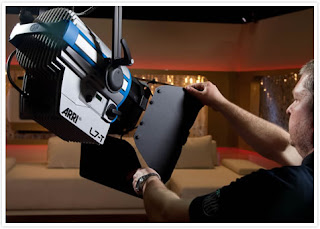 ARRI has announced the L-Series LED Fresnels, which do everything a regular Fresnel can do, with the efficiency of LEDs. There are three models:
All have a standard fresnel lens, with flood to spot, 50 to 15 degrees. The D & T are single-color versions. An on board controller provides for adjusting intensity, fully dimmable from 0 to 100% with no color shift. Control over color temperature: 2,700 to 10,000 K.
Standard models include a completely passive cooling system (no fans), while an active cooling system is available that reduces size and weight.