I went down to check out the Panasonic 3D tour yesterday. Panasonic had taken over a store in the Copley Mall for three days (today is the last day in Boston) and had a series of walls set up with different technologies arranged on shelves or on the walls themselves. The first wall on the right-hand side had still cameras, the second video cameras, and the third had a 3D television set. I went straight for that one.
Let me say up front that I'm a bit of a 3D skeptic. I've seen 3D movies a couple of times at Omni theaters, and I have the 3D DVD of Coraline, but I haven't seen Avatar. Though I've found these examples of 3D intriguing, I'm not sure I want to watch it all the time. Or even most of the time. In a way, it always seemed a bit more like a theme park ride than something I want to do regularly.

The first demo TV was out in the open and evidently the fluorescent lighting in the store was effecting the glasses; every now and again there was a very noticeable flickering. The demo people acknowledged this, and said I wouldn't see it in the "theater" set-up in another part of the store. In that section there was a fake roof and dimmer lighting. They seemed to be showing exactly the same clips in the theater section, so I moved over there.

The main clip I saw was of some footage taken in and around the Grand Canyon. It started with a couple at a train station waiting for an old steam train, cut to the train starting, then cut to them walking along the canyon edge. It was very impressively 3D. Actually, it often seemed a little too much 3D; some of the surfaces and objects looked more like cut-outs in front of the background rather than "real life." It was intriguing, but I'm not sure I liked it.

I then went on to the video game demo. This was an NVIDIA PC displaying a 3D modeled, 2D game displayed in 3D. By that, I mean the game was authored as a 2D driving game rendered using 3D modeling. The software creates a stereo 3D image without requiring changes to the game itself. The guy said there were a lot of "2D" games that already worked with this without modification. They were showing a driving game, though the guy said that some of the first person shooters were even more spectacular, but they wanted a demo that was "family friendly."

I actually liked the game demo a lot more than the "real" video demo. I'm not sure why. Maybe the "fake" nature of the 3D graphics worked better with the fake 3D effect.

Finally, a note about the glasses. They didn't seem that comfortable, and I'm not too sure I would want to wear them a lot. I could maybe manage a movie now and again, but that's about all. 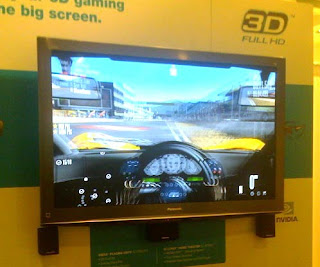 After finishing up there, I stopped in at a Best Buy store to see their 3D demo. I was hopeful to see a Samsung setup for comparison, but as luck would have it, this store had a Panasonic display.

I did manage to see some more video there. They had the same Grand Canyon clip, but they also showed a trailer for the animated 3D movie Astro Boy. Interestingly, the 3D effect in the Astro Boy movie were much more modest than those seen in the "live" video.

It's a bit of a conundrum for the producer; do you accent the 3D effect and give viewers "value for money" at the risk of over-accentuating the effect, or do you minimize it at the risk of people wondering why they are bothering wearing the glasses?

Another problem I noticed in these clips was a feeling of flicker in fast motion. I don't know what caused that flicker, but there did seem to be "something going on."


Would I buy a set? I certainly wouldn't rush out and replace an existing set just to get 3D. If I was buying a new set, I'd consider getting a panel with 3D capability, but I'm not sure how much I'd be willing to pay as a premium for functionality that - at the moment - I only think I'd use now and again.
Posted by Michael Murie at 7:00 AM