As expected, Sony announced their new prosumer camera that uses the AVCHD format, the “professional” HXR-NX5U. Not quite so expected was the simultaneous announcement of the “prosumer” model, the HDR-AX2000. 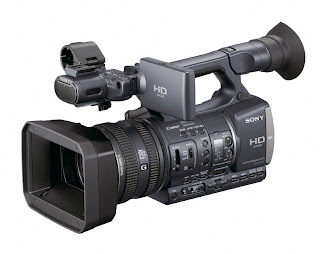 The HXR-NX5U had been expected, as it had already been previewed in November. Given Sony’s proclivity for having a high-end and low-end model based on the same basic camera, the HDR-AX2000 isn’t a shock - though it is a surprise that it was announced at the same time. I was expecting it to appear in a few months, though I got it half right; it will be available two months after the NX5U!

It seems that the NXCAM name is being reserved for the professional cameras. Both cameras share the same basic case, lens and use AVCHD to record at up to 24Mbps. Where they differ is that the NX5U includes both HD-SDI and HDMI outputs as well as two-channel linear PCM audio capabilities, 720/60P recording, built in GPS, SMPTE Time Code I/O and an upgrade option for 60i/50i switchable. The add-on Flash Memory unit (the HXR-FMU128 $800), can only be used with the NX5U.

And the surprises keep coming; the NX5U can record to SDHC cards, as well as Memory Stick Pro cards (but the AX2000 is limited to Memory Stick, which is kind of odd.) I couldn’t figure out from the site how the SDHC cards are used; I’m guessing they go in the same slots as the Memory Stick pro cards?

One more surprise, both cameras have dual XLR 3-pin audio jacks for +48V phantom power to external microphones (in previous generations, the prosumer version of the camera lacks the XLR inputs, so that’s a big plus!)

Sony’s electronics site doesn’t have much up other than the announcement, but Sony’s professional unit’s site has sample video and a brochure for the NX5U!

The HXR-NX5U will be available this month, at a suggested list price of $4,950, the same list price as the existing HDV-based HVR-Z5U. The HDR-AX2000 camcorder is scheduled to be available in March for about $3,500.

What's your thoughts on me selling my Sony HVR Z5U to get a Cannon 5D Mark II? I'm a Television Production student drop out who's getting interested in still photography. I would also like to eventually shoot short films and documentary videos.

My Z5U sits in it's camera bag with it's compact flash recorder and has been used approx. 5 times. I use a Kodak Zi6 on almost a daily basis because of it's size. The Cannon Mark II appeals to me because of it's size and ability to shoot HD video and stills.

I don't know if I can really answer that for you, but I've taken a stab at it: http://notesonvideo.blogspot.com/2010/01/reader-question-hvr-z5u-or-canon-5d.html

if you want to sell your z5u let me know, we are looking to purchase one tomorrow and would love to take yours off your hands. molly@cinematiquefilms.com

hey Brian Ashak could you please send me an email to Braden_just@hotmail.com i have a couple questions for you