New features in these models include a new Touch Panel LCD with an advanced tracking feature, enhanced image stabilization, and an all-new HD-to-SD Downconversion feature (in some models) that allows video to be easily uploaded to the web or burned onto DVDs. Some models are also compatible with Eye-fi SD Memory Cards, allowing for wireless uploading of video content. 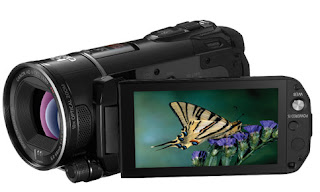 The VIXIA HF S21 viewfinder appears to be different from the one in the S20 and S200, with Canon promising "a reliable viewing environment when shooting in bright outdoor conditions."

The new models will be available in April.


VIXIA HF M-series
More compact than the S-Series, and with fewer "high-end" features (like a LANC terminal and 24p recording), the three new M series models are:

Features include: Smart Auto, Powered IS and Advanced Video Snapshot. The VIXIA HF M31 and VIXIA HF M30 models both include Canon's Relay Recording and HD-to-SD Downconversion.
Note that these models actually have a longer 15x lens, compared to the S-Series. They will be available in April.


VIXIA HF R-series
For those on a budget, the R series have a 20x HD Video Lens, Dynamic IS, Smart Auto and Advanced Video Snapshot. Both the VIXIA HF R11 and VIXIA HF R10 feature Canon's Relay Recording and HD-to-SD Downconversion. They will be available in March.

I have the Canon VIXIA HF M31

You find some suggestions here: VideoQ&A: Problems importing to iMovie