George Lucas has a new book out, and it's not about Star Wars or special effects. He may not have even written most of it; he may have just had it published to get on The Daily Show. 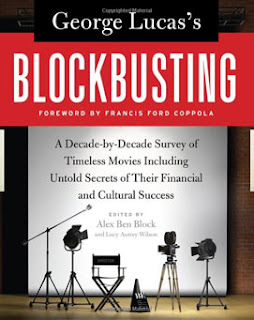 George Lucas's Blockbusting: A Decade-by-Decade Survey of Timeless Movies Including Untold Secrets of Their Financial and Cultural Success was just released, and the write-up for the book pretty much says what the title says:

Taking us decade by decade, this book focuses on the revenues, costs, production and distribution of 300 of the most critically and financially successful movies of all time from the business′s origins through 2005.


George appeared on The Daily Show last night, and though he doesn't really talk about the book, it's a funny exchange, beginning with Jon acting like a fan questioning George about problems in the Star Wars story. His ultimate response to his critics?:

It's a work of fiction. It's a metaphor. It's not real, and therefore you can either like it, or not like it - whatever.