The Pentax K-x has been out for a while, but Camcorderinfo.com has only just posted a short review. They compare it to the Nikon D5000, Panasonic GF1 and Canon T1i, and it comes up short, particularly due to the 720p support and artifacting. Their conclusion: 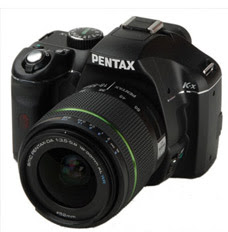 The Pentax K-x isn't the kind of camera you want to use for your professional video shoot. Its manual controls are lackluster, its handling is a bit finicky, and its video quality limited to a 1280 x 720 resolution. That being said, you would be hard pressed to find a cheaper video-capable DSLR than the Pentax K-x ($649.95 with its kit lens).


Interestingly, Dpreview reviewed the camera last month, and wasn't quite so hard on it (admittedly, they are a still camera site):

The K-x's video footage is not quite as detailed as the 1080p output of some of the higher-priced competitors but certainly in-line with other 720p video-DSLRs. It produces good quality HD footage with fairly smooth motion [...]
When recording video more or less all functions are automated (you can fix the aperture though) and inevitably the use of higher sensitivities in low light leads to grainy footage. However, the K-x is not noticeably worse in this respect than the competition and, due to the comparatively small size of the video output, the image noise is less intrusive.

In all honesty, I probably wouldn't recommend a 720p, all automatic DSLR for video either; too limited, and too much like hard work to use. But then I wouldn't recommend any DSLR camera (other than the Canon 5D Mark II perhaps) as a primary video camera. On the other hand, the value of being able to grab some video "off the cuff" with a DSLR - priceless.
Posted by Michael Murie at 1:15 PM