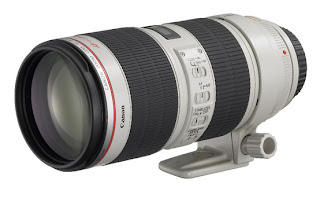 Canon has improved optical performance on the new EF 70-200mm f/2.8L IS II USM lens by redesigning the internal elements, incorporating a fluorite element and a fifth UD element. The use of the fluorite element and five UD elements helps to minimize secondary chromatic aberrations and produce better image quality with improved contrast and resolution through the entire zoom range; the end result is an optically precise lens worthy of becoming the leader of Canon's L-series lenses.

Along with its redesigned optical elements, the new lens design features improved AF speed due to a new focusing algorithm and has reduced the minimum focusing distance to 3.9 feet (1.2 meters) through the entire zoom range, allowing photographers to capture tighter portraiture shots in a small studio space. The previous lens model's minimum focusing distance was 4.6 feet (1.4 meters), whereas now photographers can stand nearly 8 inches closer to their subject and achieve sharp focus and tight crops.

Canon has also enhanced the Image Stabilization allowing it to compensate for shutter speeds up to four steps slower than 1/focal length, a one step improvement over the previous lens model.


The lens is expected in April, and no price has been announced yet.

[Note really video related, but this lens would go nicely with my Canon 7D!]
Posted by Michael Murie at 10:20 AM