360 Degree video? I thought 3D was the NEXT BIG THING!

The previous generation Webbie cameras, the MHS-PM1 and MHS-CM1 were low-cost competitors to the Flip; the PM1 featuring an odd swivel lens model, and the CM1 resembling a regular compact style camera. Both could record HD video at 1440 x 1080 (the same resolution at HDV video.) 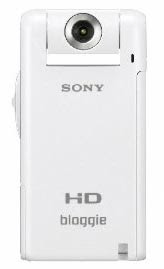 
With the new "Bloggie" models, Sony has updated the MHS-PM1 as the MHS-PM5, adding true 1920 x 1080 recording, simplifying the operation - amongst other things - but keeping the basic shape the same.

For the MHS-CM5 they've gone to a pistol grip format, and - interestingly - added a 360-degree video feature [See UPDATE]: 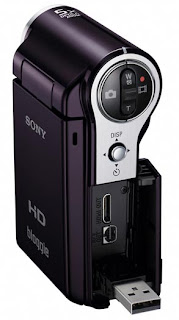 Record everything around you with the included 360 Video lens
Never heard of 360 Video? Now you have. With this latest piece of gadget that comes with [the camera], you can literally record everything that is "around" you. Simply attach this unique add-on lens to the camera and place it in the middle of the action you want to record, for example your house party in the living room, in the car on a camping trip with your friends, etc. to get a full circle 360° footage. This new style of video will surely add a whole lot more fun to your collection of snap shots.
(PMB software is required to view the results.)


I haven't been able to find anything else about this feature (or the add-on lens). Both cameras are expected in early February, listing at $170 (Sony MHS-PM5


[UPDATE 11:58PM - I got confused by erroneous information on the Amazon product page. It appears that it's the MHS-PM5 that supports the 360 degree video, and it's a separate "kit" that includes the camera and the special lens for $189.99. I'll post more when I know more!]
Posted by Michael Murie at 1:32 PM