Steve Mims shot a twelve-and-a -half minute, short fiction film called HONORARIUM late last year using a Sony EX1 and a Canon 7D. He’s written a fairly exhaustive article about how the movie came together and was shot, including all elements of pre- and post production. It makes for a fascinating read. 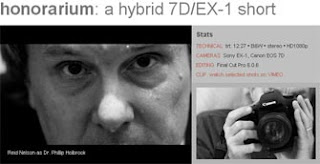 Clearly he still likes the EX1 – which was used for about half the film – but he found the 7D somewhat revelatory, with it’s low-light abilities:

After having used the EX-1 the day before, the change to the Canon 7D was electrifying. It was as if, optically, we’d switched over to a 35 mm motion picture camera. The 85 mm lens delivered beautiful, glossy, shallow depth of field shots while only being a few feet away from the subject. Additionally, we bumped the ISO up to 800. As the rest of the shoot unfolded we often used no lights. [...] It was really liberating.

lens (which is less than $400), as well as the kit lens for some wider shots. His biggest complaint is the lack of a real viewfinder, and that pulling focus was "tricky."

But don’t just read the article to find out more about the EX1 vs. the 7D. There’s lots of interesting little details, including how he solved sound problems encountered with a Mercedes that was too loud by shooting inside a Honda Element:

We mounted the EX-1 on a high-hat atop two apple-boxes directly behind the passenger seat in the Element. Next we put an apple-box in the very rear of the Element. One at a time, I had Reid, then Alex, sit on the apple-box and Kakii drove us out onto to the freeway. By keeping the framing tight, I was able to exclude the giveaways that we weren’t in the Mercedes and the sound was much better.

Posted by Michael Murie at 2:22 PM