One of the things that Sony talked about at last weeks demo of the PMW-F3, was the upcoming SR-R1 Memory Recorder. 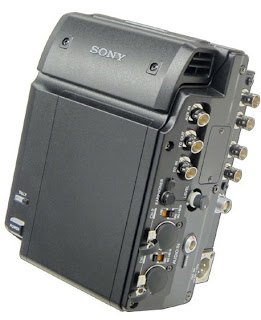 Interestingly, when Sony reps were asked why the PMW-F3 did not record at 50Mbps (at the highest quality to internal cards it records 35 Mbps in 4:2:0 8-bit XDCAM EX format) Sony's response was that it would have added too much to the cost, but that with the SR-R1 (or other similar output options) those who need that sort of quality can get what they need.

While Sony hasn't officially released information about the SR-R1, it is covered in a 12-page special report from Film And Digital Times on the PMW-F3, and the Sony reps clearly thought that the pricing of the SR-R1 would be competitive.

Note: several broadcasting organizations such as the BBC and PBS have official minimum standards for video quality, and for digital recording cameras have so far been inclined to only approve cameras that record at 50Mbps or above.
BBC: Commissioning: Producing in High-Definition
Posted by Michael Murie at 2:35 PM

Any speculative idea of pricing for the SR-R1?

I found a listing with a price of $12,500, but can't see one on Sony's site or any other official distributor at the moment.
http://www.dvwonline.com/professional-video/pro-video-recorders-and-players/sony-sr-r1