But everyone was really there to see the PMW-F3, and participants did get to handle a pre-production model, and see footage that had been shot with a PMW-F3.

The Sony PMW-F3 is supposed to be shipping in February, and Sony seem confident they have a winner on their hands. It may not take on the Panasonic AG-AF100 (that’s the job of the upcoming NXCAM 35mm) but it looks more like they are going after RED, and maybe the studios and independents that are using the 5D MkII.

And they are still being coy about some details: 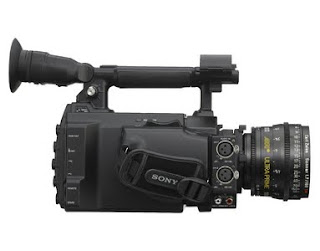 Sensor Resolution
The PMW-F3 features Sony's first CMOS EXMOR Super 35mm, and it has a resolution of 3.43 Megapixels, though they aren’t disclosing the number of pixels across the vertical; yet.* But according to Sony, it has a “very interesting” color filter array.

USB ports
There are two USB ports; one device, and the other host. In device mode, you can connect the camera to your computer to download files from memory. Host mode can be used to communicate with the camera; probably. They aren’t talking about what it will be used for yet.

The HDMI Port
In addition to HD-SDI output, there is also an HDMI port. This will send out full 1920 x 1080, but they’re not sure if it’s 8 or 10 bit. Also, they weren't sure if it was available when HD-SDI was being used.

The PL lenses
Sony is selling PMW-F3 body only, or as a package with three PL mount lenses (a 35, 50 and 80.) Sony isn’t saying who actually makes the lenses - though it’s not Sony. All they’ll say is that they are made in Japan. The lenses will not be sold separately.
They did have one of the lenses on the prototype. It was impossible to judge it’s image quality, though it does have T-stops and a long focus rotation, but it did seem rather plasticy compared to Zeiss Cine 2.0 lenses. (On the other hand, you are getting three lenses for less than the price of two Zeiss Cine lenses, and this was a prototype.)

Zoom lenses
In addition to the three PL fixed lenses, Sony is developing some zoom lenses, including two that are F3 mount lenses, and a wide angle zoom that (possibly?) uses the PL mount. Details are still a little scarce on when these lenses will be available (one will probably appear in April, with the other two much later,) and their exact specifications are fluid too.

Color LUT Management
The PMW-F3 will be able to store four LUTs, and you will be able to transfer them to and from the camera, but they haven’t determined how; whether it will be via SxS, USB, Firewire or MemoryStick.

Lens Communication Protocols
Two communication protocols are built into the PL lens mount that will support the Cooke/I protocol, and ARRI LDS. These protocols can send metadata (T-stop, focal length, aperture, serial number) in real time. The camera will be capturing the metadata, though they can’t yet say how they are doing it; whether in a separate file or embedded in the video file. 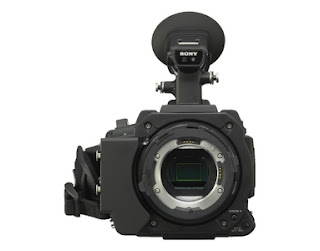 Future updates
Sony has already announced that some features won’t be available at release, and will be enabled with future firmware updates (which will cost extra.) The first firmware update is scheduled for April and will include: Partial 3D Link support, dual link RGB, and S-Log. In September, the complete feature set for 3D Link will be released.

SD Cards
The camera records to SxS cards, but it is possible to use SD cards with an adapter; provided they are Class 10 cards.


While there are some things that remain unknown about the camera, Sony has released a few details about the camera’s performance. They claim the camera has extremely high sensitivity, incredible signal to noise, and dynamic range approaching 13 stops. In video mode it has a 63dB signal to noise ratio with no noise reduction applied and a sensitivity rating of approximately ISO 800. In S-Log mode, it can achieve the equivalent of ISO 1600.

The camera comes with HyperGamma (2 & 4) built-in, which extends the dynamic range of an image. The firmware update will then add support for Sony’s S-Log, which almost doubles the effective sensitivity of the camera (S-Log is a gamma curve that better captures what’s coming from the sensor.) Using S-Log requires using an editor that supports color lookup tables (LUTs) or the video will looked very washed-out (at the moment, After Effects and Apple Color support LUTs.)

One of the interesting things about the camera is how it seems to span two separate camera systems. At the beginning of the presentation, the focus was on Super 35mm sized sensors, and how the F3 is similar to the F35. Towards the end of the presentation, the F3 was described in tandem with the EX platform, on which it is built. Hopefully it won’t suffer an identity crises.

All in all, it's an intriguing camera, and while the upcoming NXCAM 35mm is more in my price range, I'm intrigued to see the reaction to the PMW-F3 when it is finally released.

Video from the event: