Sony isn't talking about the sensor design of the PMW-F3; other than to say it has a "very interesting" color array design. But at the recent PMW-F3 preview they did talk about the sensor in their F35 Cinema camera, and that certainly got my attention as I wasn't aware of it's "unusual" design.

The F35 is an unusual HD video camera with an unusual price; somewhere around $200,000. This camera has been used to shoot feature films, including Tron and Transformers 3. To understand how unusual the sensor is, it's important to understand how most digital cameras - both still and video - currently work.

CCDs and CMOS chips detect brightness, not color. To detect color, color filtering must be added. But this means that any one pixel in a sensor can only detect one color (Red, Green or Blue).

Most cameras use one of two ways to calculate the RGB value for a pixel in the final image.

Single-chip cameras
Most single-chip cameras use a Bayer color pattern filter over the sensor. An individual pixel on the sensor has either a Red, Green, or Blue filter over it. The actual color of an individual pixel in the final image is calculated by combining the color values from adjacent pixels, so while the brightness accuracy of any given pixel in the image is correct, the actual calculated color value is a "guess."

Note: The Bayer pattern have more green pixels than red or blue because the human eye is more sensitive to green light. 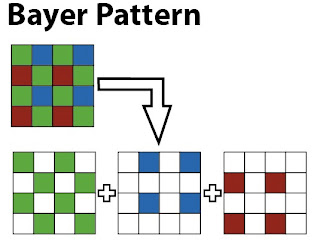 Three-chip cameras
These cameras use a beam splitter that separates the light coming through the lens, and then three separate chips to detect the Red, Green and Blue values of each pixel in the final image separately. These three separate values are then combined to get the actual color value.

Three-chip cameras are more expensive - and larger - than single-chip cameras, but are preferred for their color accuracy.

F35 Sensor
The F35 camera has a single 12MP sensor, so you might think it works something like the Bayer pattern. But it has a very different pattern of filters, with vertical strips of RGB filters. The dimensions of the sensor are 1920 x 3 horizontally, and 1080 x 2 vertically. The net effect is that the color value of a single pixel in the final 1920x1080 HD image is calculated by taking the color vales for two blue, two green and two red pixels and adding them together and averaging them; using two pixels for each color improves the accuracy of the measurement. 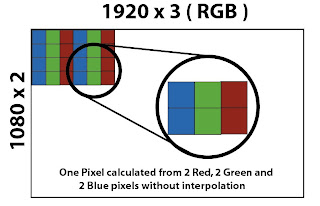 With this technique, they've produced a color camera that has the color accuracy of a three-chip camera, but uses just one chip. Also, it doesn't have some of the anomalies that three-chip cameras suffer from (See: The Not-So-Technical Guide to the Sony F35).

You might think that this method was used to save money, but Sony says that this CCD is very expensive to produce. The interesting thing to see is wether they will adapt this to lower cost CMOS sensors and lower priced cameras in the future.