Without the need for never-ending firmware updates....

There's a video at Vimeo that shows a bit from the session where Sony previewed their affordable 35mm cinema camera.

"The next stop on Sony's digital 35mm roadmap will be a smaller, more affordable camcorder. This entry-level 35mm model will be released prior to NAB 2011, it's not quite ready for the show floor, but we wanted to give you an advance peak at this new camera.

This new camera will easily fit into the existing post-production workflows and will have all of the features that you would expect from a professional Sony 35mm camera. Our goal is to establish a 35mm camera lineup for every budget without the need for never ending firmware upgrades or workflow issues."

Hmm...."never ending firmware upgrades" - who could that be - RED - in reference to?

And when they say "affordable" and "entry-level" are they comparing to the cost of RED cameras, or the current entry level of HD DSLRs? Time will tell. Since I'm more of a documentary shooter than a cinema shooter, this camera probably isn't for me, but it's certainly an intriguing development. 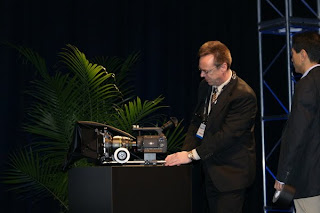 Posted by Michael Murie at 9:47 AM