More on Red Rock Micro
FreshDV has another Red Rock Micro wireless follow-focus video. There's nothing really new here, but I feel compelled to note it as they have nothing on their site yet - notice that when demoing he says that "the control surface drops down into the remote, and you can drop in an iPhone"....except he doesn't show any of that happening, just picks up the second unit.


DaVinci color system drops price
Before there was Apple's Color, there was the DaVinci Resolve system, which cost lots of bucks. In the past year or so, a number of small production houses have started using Color because it's so much cheaper. Now Blackmagic, who bought DaVinci last year, have fired back by dropping the price of the software-only version to $995. If you want it with the control board, that'll cost you $29,995, but $995 is an interesting price.

I've never seen DaVinci in operation, and have found Color confusing enough. Should I be concerned that the only shots on the company website seem to be of the control surface, not of the screen UI?


Sony outs a new pro-sumer camera
Sony has semi-announced (I haven't seen an official press release, but there's a web page and other sites are reporting it) pro-sumer camera, the HXR-MC50. This appears to be part of the NXCAM line. I figured they'd add to the NXCAM line, thought this isn't the camera I was expecting.

Details are a bit unclear, but it's probably a single-chip camera with a shotgun mic, 64GB of internal memory and records in AVCHD format. Some information can be found here, and more here. no word on price, availability probably in the summer.

Sony.uk: NXCAM > HXR-MC50E (spec page seems to be wrong at the moment at is mentions 1/2" chips and bayonet mount)
[UPDATED 4:26PM] There's speculation that this camera may be little more than the HDR-CX550V (or similar) in drag.


If enough people ask, Canon will do it...
Cinema 5D has an interview with Canon's Tim Smith where he confirms that Canon is aware there's a lot of interest in "big chip" cameras, but he's got nothing to announce. He also basically says that they aren't currently working on adding the upgrades they added to the Canon 5D to the Canon 7D (histograms, manual audio), but they are always listening to customers.... 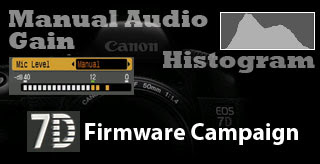 Email Canon from their Contact Canon page, or phone Canon at 1-800-OK-CANON and ask about getting a firmware update for the 7D to match the features in the 5D Mark II firmware 2.0.3
Posted by Michael Murie at 3:16 PM