Dual recording with the H4n

If you're shooting with a DSLR or a budget camcorder, you've probably run into the limitations of internal mics. While buying a better mic is half the solution, actually connecting it to the camera can still be a problem, particularly if you want to use professional condenser mics that require phantom power. Adapters like the Beachtek DXA-6A Audio Adapter are one solution (depending on your camera and mic combination) but things can get awfully messy; the adapter box is one more thing to deal with. Sometimes it's easier - and simpler - to use a separate recording device. 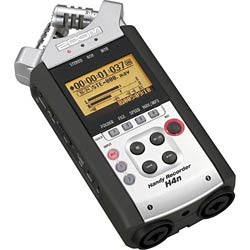 In the realm of portable recording devices there's a lot of choices, with no obvious "right" one, though the Zoom H4n is inexpensive and has proved popular with low-budget and independent filmmakers. Philip Bloom says of the H4n:


The Zoom H4n is a remarkable little device. It records everything from .mp3 48khz to 24bit 96khz. It has built in stereo condenser microphones and two XLR inputs which means you can record 4 channels of audio at the same time. It records onto SD cards and runs on 2AA batteries for about ten hours. It costs about $349.


Not only does the H4n offer one of the best bang-for-the-buck ratios out there, ...[it] is a bit of a Swiss Army Knife production tool. Not only can it serve as an external recorder for DSLR video work, it can also act as an audio interface for your computer.

The H4n has phantom powered XLR and balanced ¼” jacks and two external mics. You can record 4 tracks at once, though in that mode two of the tracks are the built-in mics. Sampling can go as high as 96lHz/24-bit.

One nice bonus is that the H4n can be used as a computer interface; useful for recording directly to your computer. It comes with Cubase LE software.

The LCD screen is large and bright, and dims after a few minutes of inactivity to save power. The H4n runs on AA alkaline or NiMH batteries – you’ll get about three hours – and comes with an AC adapter. The RC4 Remote Control is sold separately, and costs $26.95.

There’s a speaker for playback, though you’ll want to use headphones for better - and more accurate - monitoring. Most users seem to be impressed by the quality of the built-in mics; it’s better than most camcorder mics but not as good as a quality mic.


Recording Dual Audio
Dual recording can seem intimidating, but is surprisingly easy when your camcorder has a built-in mic. All you need to do is record a sync sound at the beginning of each take that's recorded by both the camera mic and the external recorder. A clapboard can be useful for this, but is not required; simply clapping your hands can be enough. It's important to have a short, sharp sound that quickly peaks so you can easily identify the same point in time on both tracks. Make sure both recording devices are close enough to the sound source to capture it clearly.

It's a good idea to slate (clap) at the beginning and at the end of the recording. That way, when you sync the two tracks up in your editing environment you can make sure there's no drift. If there is a significant difference between the two tracks at the end, then it's possible you have a problem with your settings not matching when bringing the tracks into your editing environment (for example, see: Audio drift issues in Final Cut Pro.)

Posted by Michael Murie at 7:36 PM