Manfrotto has a new tripod head, the 504HD, designed for “cross over” (i.e. DSLR) users. This head looks interesting as it's easily balanced (and adjusted) for cameras that are mounted on other rigs and therefore might be forward heavy or otherwise oddly-balanced. It will be available end of June, and with a good set of sticks - and a bag - it will cost about $750. 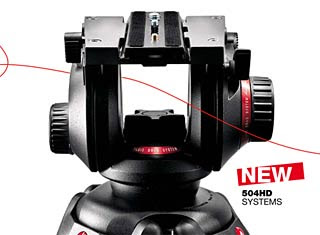 The following comes from their web site:


The bridge design improves the head's rigidity and its PAN friction control is fast, simple to fine-tune and protected from knocks. The PAN axis rotation unit uses ball bearings for smooth, vibration-free movement that can be adjusted using the head's FDS variable friction system.

The 504HD is suitable for Manfrotto PRO series video tripods with mid-level or ground spreaders and for carbon fiber single-leg MPRO tripods.


[UPDATE 11:10PM] The 504 HD head, as well as combinations with different legs, are already listed on Amazon's site:

The Manfrotto 504HD-546BK Tripod combines the innovative and stylish 504HD Fluid Video Head with the 2-stage aluminum 546GB Pro Video Tripod--creating an ideal combo of affordability, stability, and smooth, precise control. This compact, versatile system was designed with independent video and provides the level of ergonomics and support required by today's small crews and one-man bands and U can by this brand from Electronicbazaar AU as its a Mind blowing equipment to Support your View.

Providing the list of Best DSLR Video Tripod to make your videos even more eye-catching. All you have to do is to go through the list and select the best one for yourself.