Surprisingly (because I am a 3D skeptic), one of the most interesting talks at the SuperMeet meeting was Tim Dashwood's do-it-yourself 3D demo.


After introducing the concept of interocular separation (the distance between the eyes, which is about 2.5 inches) he warned that it's important to avoid too much convergence; things coming "close" and forcing the viewers eyes to cross.  Excessive convergence is okay only for a fraction of a second (i.e. for quick gags) but must be avoided otherwise. Remember the 1/30 rule he advised: interocular x 30 = closest subject.

Note that while interocular is used for the distance between eyes, interaxial is the correct term for the distance between the two lenses; except that a lot of people use interocular for both.
The opposite of convergence is divergence, which he said is really, really bad and must be avoided too.
Tim demoed a basic rig he built for two Canon T2i's using a 4 x 6 inch piece of 50/50 beam splitter glass that cost about $7. 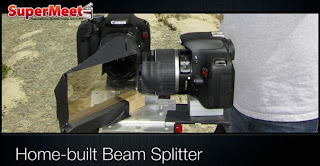 Beam-splitter rig with two Canon T2i's
It's important to have two cameras that are the same model, and he offered these tips for setting them up:

PREPARE YOUR CAMERAS
If gunlock is not available, he recommends using the highest frame rate you have as well as a clapper to help you sync the clips.

Tim has developed a plug-in for Final Cut, Motion and After Effects that helps align two stereo clips, as well as produce output in different formats: Side-by-side, Over/Under, Anaglyph, etc. You can adjust the alignment and horizontal and vertical disparity of the two clips, and crop the frame as needed. You can also adjust convergence, providing a creative tool for adjusting the depth effect after the shot has been recorded.

The Stereo 3D Toolbox plug-in is available as a free demo version (it adds a water-mark to the output) or a license is available for $389.

Finally, if you're looking for a way to distribute your video, YouTube accepts 3D content as a side-by-side upload and then plays it back using different playback options. When you upload the source, you add the following tags so that YouTube knows how to handle it: