Some information - and videos - of Redrock Micro's new microRemote looks really cool. The microRemote is shown in two videos at photocinenews: Part 1 and Part 2. Over at Cameratown they have a more formal release: Redrock Micro Introduces the New microRemote Remote Follow Focus. 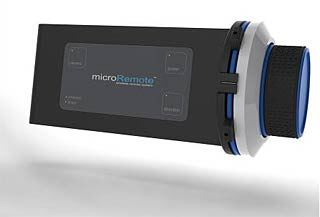 microRemote (without the iPhone/iPod installed)
This looks really cool, though no word on price and availability.

[UPDATED 3:31PM]: part 3 has information on pricing and availability. It's supposed to be available in the summer. They are currently taking non-binding, no-deposit reservations. Send an email to remote@redrockmicro.com. It sounds like there are five different options available (motors, base station and remote.) Target price is about $1,000 for the base system (which is up $500 from the original target!)

[UPDATED 7:06PM]: Cinema 5D has a longer video of the system which provides a little more information; the wireless unit can be tethered if you can't use the wireless radio at a location, the iPhone/iPod unit will become a platform "for a lot of things." He said they didn't hit the $500 price because they realized the trade-offs they'd have to make in terms of the motor were too great.
He mentions "other things" but I haven't yet found any information about them...
Posted by Michael Murie at 3:06 PM