Review - SONY FS100E Camcorder | Adam Garstone | HD Magazine
A mostly positive review of the Sony NEX-FS100, which interestingly seems to favor this camera over it's sibling, the PMW-F3:


The FS100 is obviously intended for film-makers – one big giveaway is the stud mounted at the focal plane so you can hang a tape measure on it for focus measurements. If you’ll excuse the pun, that makes it a more focussed product than the F3, which just seems confused as to its identity. The problem with this focus on film-makers is the recoding format – AVCHD just isn’t good enough to be shown on a screen 20’ high. Interestingly, the sensor in the FS100 is rated at ISO 400, though in the F3 the same chip is rated at ISO 800 – I’m guessing that the downrating is to reduce the noise and hence improve the apparent performance of the CODEC.

How does the iPhone 4S camera stack-up against other cameras? | Lisa Bettany
| Campl.us
Comparison stills taken with all generations of the iPhone camera. There's some notable improvements in the iPhone since the original iPhone.


"[the director] wanted the cars to represent what was happening at any given moment from a story perspective. At the beginning of the movie where Driver is taking these two thugs from their exit from the robbery. So instead of speeding away, he quietly pulls out, and in fact we don't play any car engine at all there. He alludes the police from a sonic perspective; they can't hear him, the can't see him, they can't find him, but he can look out at them. And then later in that same sequence he gets spotted on a bridge from a helicopter, he floors it and takes off, and all of a sudden the sound comes to life."

Dual-channel Mono Audio in FCP X | Larry Jordan | Blog
Larry explains how to treat a stereo channel as two mono channels. In addition to this tip, check the comments where Larry responds to someone complaining about the limitations of Final Cut Pro X:


I appreciate your frustration. SOME things in FCP X are much easier, others are not. Audio is a mixed bag – the filters are to die for, the editing is essentially equal, audio transitions a little worse – but MUCH more flexible, and audio mixing still needs work.
Trimming is better, editing is equally fast, color correction is much better (compared to FCP 7)….
The list goes on – in both directions.

The Limits of Variation | Roger Cicala | LensRentals
Roger has been posting some interesting articles on the blog at LensRentals. The latest is an interesting - if somewhat frustrating - article about the variations in performance between lenses of the same make and model. It starts with some disclaimers:


before I go further, please raise your right hand and repeat after me: “I do solemnly swear not to be an obnoxious fanboy and quote this article out of context for Canon-bashing purposes.”

Then goes on to note that one particular lens they carry - the Canon  EF 24-70mm f/2.8L - is subject to larger variations due to wear and tear:


All of our lenses rent with the same frequency. All of them get the same care. So what was different about 24-70s that made them have problems with aging when the other lenses didn’t? There is one thing that is somewhat different about 24-70 f2.8 zooms: they are both barrel extending (rather than internal) zooms and are rather heavy. Most barrel extending zooms are lighter. Maybe thousands of zoom twists was wearing something out.

But what do you do with this information? I'm not really sure, though if you have a copy of that lens, follow his advice - don't panic - and if you've been using it heavily and noticed it seems a little soft at 70mm, you might want to have Canon take a look at it.

And if you're interested in the details of lens design, check out two other articles:

LENS GENEALOGY PART 1 - In which I begin to answer the question “Why Do You Put the Lens Diagrams on Your Website?”
LENS GENEALOGY – PART 2

Amazon's Kindle Fire Will Become To The Video Industry What The iPod Was To The Music Industry | Dan Rayburn | StreamingMediaBlog
Dan thinks that the Amazon Fire will be for streaming video what the iPod was for music:


Thanks to Amazon's AWS services and CloudFront they have made distributing video easy and affordable with their self-service model not to mention, provided a cloud based platform for a lot of other vendors in the industry. Add in the fact that Amazon now offers more than 12,000 movies and TV shows for free with Amazon Prime and Amazon's got the content offering growing quite nicely and will drive more consumer video consumption with some of the same scale Netflix did.

Wi-Fi BacPac™ + Wi-Fi Remote | GoPro
In addition to the GoPro HERO2, GoPro also announced the Wi-Fi BacPac and Wi-Fi Remote which will be available sometime this winter and will work with both the original HERO and the HERO2:

It will also enable streaming with the HERO2, but not the HERO.

I Want To Make A Horror Movie | Gregory Feremach | Website
It's that time of the year; the perfect time to make your horror movie! This chart shows you how! 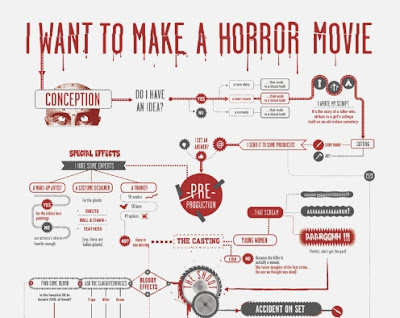 KataData | Katabatic Digital | iTunes
Need to calculate how much storage space you need? KataData is a runtime calculator for iPhone. Enter the amount of footage you have and KataData will calculate the runtime or storage. Choose camera, external recording device, or codec.
Cameras supported include: Arri Alexa, Phantom Flex, RED One & EPIC, Sony NEX-FS100 & PMW-F3, Canon DSLRs and Panasonic AG-AF100.