The Cat Ate The Dog

Ricoh is buying Pentax. Neither of those companies have much involvement in video, so it's hardly worth noting, except that my first SLR camera was a Ricoh. Ricoh's SLRs used the Pentax K mount for lenses, so the two companies have had a relationship for many years. In fact, I bought the Ricoh camera (followed by a second Ricoh two years later) because I couldn't afford the Pentax camera I liked(!) Ricoh cameras were cheaper than the Pentax models.

At the time I thought that one day I'd "upgrade" to Pentax.

Not that I was unhappy with the Ricoh camera. It served me well until I started playing with digital cameras in the mid-90s; infact it lasted until I switched to digital - and ended up with Canon. 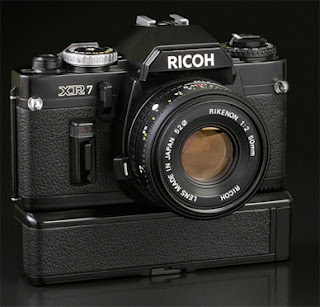 Ricoh XR-7 (source: photo.net)
It seemed a lot rounder, and a lot cooler when I bought it!
Posted by Michael Murie at 10:49 AM