Documentary Shooting with the Panasonic GH2

Jared Flesher is currently shooting his second documentary, Sourlands, using the Panasonic GH2. He sent us the following report on his experience with the camera.

I started shooting my next documentary, “Sourlands,” with a Panasonic GH2 a few months ago. Now that I have some serious time in with the camera, I thought I might pass along some thoughts on the experience so far:

As everyone knows, DSLRs come with limitations built right into them, a few of which I’ll touch on below. But keep in mind that this camera, with the 14-42mm kit lens, costs $1,000. For a grand, I think the images coming out of this camera absolutely rock. Do I wish the camera fairy would come and drop off a Panasonic AG-AF100? Sure, and I would start using the AF100 immediately. But as the camera fairy is not coming, and the AF100 costs five times as much as the GH2, I’m feeling pretty good about the camera I have.

There’s at least one big advantage the GH2 has over the AF100 and probably any other pro video camera. I can take the GH2 anywhere, including into stores, and shoot footage without anyone even noticing me. That’s why, no matter what camera I end up with next, I’ll never sell my GH2. (Unless maybe because I’ve upgraded to a GH3.)

I haven’t had any significant problems with moire. I notice rolling shutter sometimes on whip pans, but I think that’s probably only because I’m looking for it. I don’t think consumers of documentaries fixate on small irregularities like rolling shutter, so I don’t spend much time worrying about it. I think they want good stories. 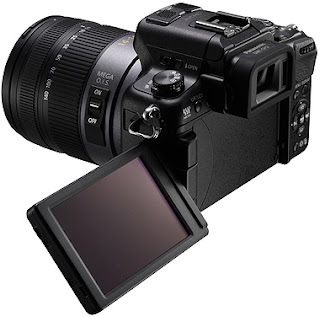 I’ve abandoned the camera’s auto-focus and use manual focus for just about everything now. If I have a chance to set focus before a shot, I put my eye up to the electronic viewfinder with focus magnification on and that works great. If I need to change focus mid-shot, it’s a little hairier because then the magnification mode is disabled, plus by this time I’m usually watching the LCD, which isn’t as good as the EVF. When I’m running-and-gunning, I generally shoot at something like F/6.3, and this allows a little more leeway for focusing imperfection. Using this method, I rarely screw up and get an unusable shot. Using autofocus, sometimes the camera would make the wrong decision and then you do get unusable shots.

Lately, I’ve been dragging this camera through the deep woods, following around bird-chasing ornithologists on hikes that go on for many miles. Having a small camera is great. 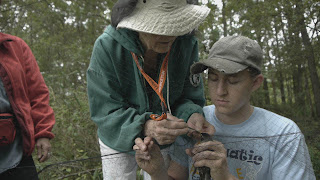 Sourlands
I’ve been shooting with Sennheiser mics plugged into a Beachtek XLR adaptor, plugged into a 3.5mm to 2.5mm right angle adaptor, then into the camera. No headphone monitoring available. It’s not a perfect situation (obviously), but I’ve never had an audio meltdown and never gotten audio that’s not usable.