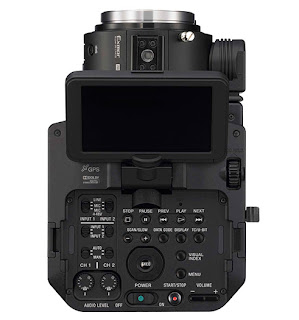 It's in the lens
If you're planning to get an NEX-FS100, you're going to have to think about what lenses you will use with it. Because you'll want to use E-mount lenses if you want to have optical image stabilization and auto-focus. If you use A-mount lenses (with the A-E mount adapter) you will probably still have auto-focus (though it will be interesting to see how well that performs, if it's like the NEX-VG10, it's not the greatest.) But if you use any other lenses, you lose all that.

The product specification for the NEXFS100UK says:

But the NEXFS100U (body without the lens) lists: 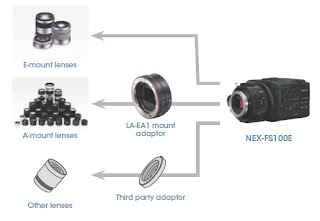 Meanwhile, The DSLR Shooter, while noting that the E-Mount provides:


The beauty of short flange distance is that you can practically use any lens via a 3rd party adaptor. There’s definitely possibility of putting your nikon or canon mount lenses to good use.

Laments "8 bit, lack of HD-SDI and no built in ND" The latter, according to one source, is a limitation of that E-Mount. Supposedly there wasn't enough room to include neutral density filters.
DSLR Shooter: Sony Announces: NXCAM NEX-FS100


Sensitivity
The sensitivity of the camera - unsurprisingly -  depends upon the lens you use. Sony's own press release gives two different sensitivity numbers for the camera (at different points in the release):


while providing the sensitivity necessary for shooting at a minimum illumination of 0.28 lux (when using a fixed shutter speed of 1/30, auto gain and an iris setting of F1.4).

your mileage may vary...


Sensor Resolution
The NEX-FS100 uses the same sensor as the PMW-F3, but while Sony has released the total number of pixels in that sensor (3.43MP), they won't say how those pixels are arrayed and used to produce the HD image. The press release just notes:

- what does that mean?


Release Date
In one earlier report I noted a release date of May. The official press release notes that release of the NEX-FS100 and HXR-NX70 will come sometime between "July-September"

I've been making a lot of noise about the image stabilization issue for a while, but it's largely fallen on deaf ears in the NEX community (and presumably to Sony) because that world is fractured by a majority of still camera enthusiasts who generally dislike image stabilization for shorter focal lengths like primes, believing (rather superstitiously) that image stabilization meaningfully degrades still picture quality.

The E-mount lens standard requires more than just allowing for image stabilization; Sony should be Active-ly (pun intended) enforcing it, because its future in video depends upon it.

I fall into the latter camp; if the camera's screwing up capturing the moment, then I don't want it. I know there are people shooting news with DSLRs, and I'm really amazed that they do it. For a lot of what I shot, I want image stabilization and auto-focus too!

Not sure if this camera will satisfy both worlds.