A curse on BRAVIA Sync

A couple of weeks ago I bought a new Sony TV because my ten year old Trinitron set developed a habit of going all red and turning itself off (a story for another time.)

Unbeknownst to me, Sony has this new feature - added within the last ten years, anyway - called Bravia Sync that lets Sony HDMI devices talk to one another.

For the first two weeks everything was fine; I was managing my TV, amp, Cable box and Blu-ray player separately, but quite happily...until...

...last night I accidentally pushed a button on the TV remote that did something I didn't even know was possible; it told the TV to talk to the Sony amp and the Sony Blu-ray player [Sony, Sony Sony? Haven't you heard of Panasonic? Toshiba? -Ed]

Everything continued to work fine when using the Blu-ray player; in fact, now the TV remote could adjust the volume on the amp. Nice! The problem was the Cable box. It isn't a Sony device [Seriously, LG? Samsung? -Ed], and it is connected via the Component inputs rather than HDMI. The amp and the TV didn't seem to like that at all; whenever I switched the TV to the Component 1 input, the amp would switch itself to the TV input rather than the SAT/Cable input, and when I switched the amp back to SAT/Cable input the TV would switch to HDMI 2!

It took me a good five minutes to figure out that the two were conspiring against me to mess me up! [How about Sharp? -Ed]. 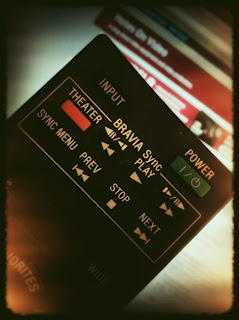 A Google search turned up documentation about how to turn Bravia Sync on (See: Using BRAVIA Sync with Control for HDMI) but nothing about how to turn it off. A few posts vaguely talked about "doing the reverse to disable it" or going into the TV's toolbox settings menu and turning it off. I found the TV's menu with HDMI communication enabled okay; but the TV wouldn't let me choose that feature to turn it off!

Finally, I found someone with a tip which worked; here's the important part:

Resetting (Turning Off) BRAVIA Sync
To reset everything; unplug the HDMI cable, turn off everything, turn off the power, and wait two-five minutes. Then reconnect.


Thankfully, after going through that, things now seem to be back the way they were: I can switch to the cable input on the amp, and the TV will stay on the component input.

In conclusion, it's probable that I either have the cable box plugged into the amp wrong, and/or I need to reprogram the amp so that things will work correctly; but do you know how hard it is to understand those manuals?! I am just glad I have everything working again!

Quite helpful piece of writing, thanks for the post. HDMI Cables

I am really impress with you for the selecting of new and unique topic and also well written article on it. trumpf eco nozzleThanks for sharing with us.